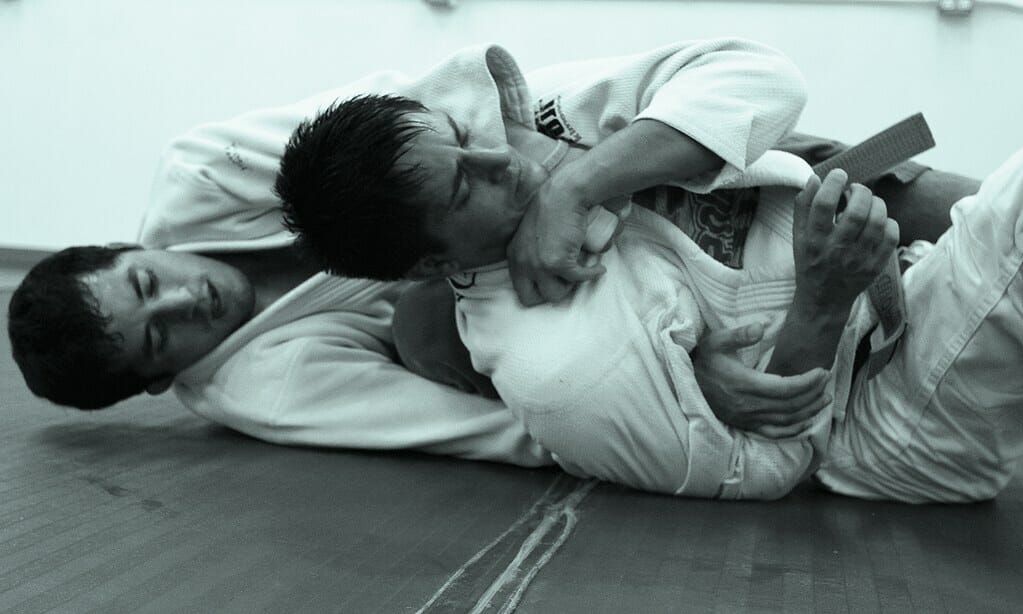 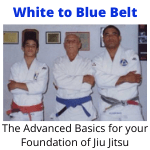 So, you’ve tried BJJ and you’re sold on it.  Regardless of whatever sparked you to start training, you are likely wondering what it takes to learn and level up in BJJ to earn your blue belt.

Most people aren’t training to be stuck at a BJJ white belt forever.

Nevertheless, it can sometimes seem like the coveted blue belt is always out of reach.

There are many valid reasons beyond your control that may be keeping you stuck at a BJJ white belt.

Nevertheless, there are some consistent training patterns that can keep practitioners stuck at a white belt grappling level despite their desire to improve at BJJ.

I’m going to get this one out of the way first. The NUMBER ONE reason people get stuck at BJJ white belt is a lack of consistent training.

While most would consider three classes per week the bare minimum for consistent progression, if you can make it four or even five classes per week you will obviously progress much faster than someone who’s barely carving out half that mat time.

Beyond reduced mat hours, the biggest problem with training even two, much less one, days per week is that you are unlikely to have enough time and reps with the day’s move to add it to your arsenal.

You’ll do the move a few times, likely be unable to apply it live, and then five days later repeat with a new move.

Inconsistent training will keep you stuck at BJJ white belt.

Compare this to training four times per week.

On day one you learn the major movement and positional spar to practice it.  You won’t hit it (most likely).

Having tried the move, you will now be more prepared to ask your coach-specific questions about the parts that didn’t work for you yet.

Maybe your grip placement was off or you missed an underhook. Whatever the specific detail, it is this intricate process of hammering out each aspect of the move that will allow you to apply it on better players and avoid being stuck at BJJ white belt.

This process is virtually impossible without spending consistent quality time on the mats per week.

The second major culprit for keeping people stuck at BJJ white belt is consistently going too hard during live rolling and positional sparring.

When you are first starting out, you often don’t even realize how hard you are going. Often, most new players are amazed at how sore they get from BJJ.

Although a big part of BJJ is bruises, bumps, and abrasions, most of the time a huge amount of the pain associated with beginning BJJ is due to rolling close to 100 percent every roll.

Whether you are too focused on gripping to stall positions or relying on strength for your attacks and defense, this will seriously hinder your progress.

For example, let’s say you roll at 95 percent for the first roll. By the end of it, your forearms are shot, you’re gassed out, and you need the next round off to catch your breath.

Compare this to going 70 percent and getting in all the live rounds.  It goes without saying who would progress faster.

Furthermore, the recovery demand and injury risk associated with constantly rolling with near-competition intensity is statistically going to reduce your mat time in the long run.

The majority of players who train four days a week for months on end are not going nearly that hard on most of their rolls.

Finally, rolling too hard can reduce your ability to learn the timing of the techniques that make BJJ work.

You can’t learn what reactions are common when you try a certain pass if you are too busy trying to Americana someone while in their closed guard.

Without having a game plan based on the likely counters to your skillset, you’ll never learn the technique progressions that will let you submit higher level players.

Don’t get me wrong, hard training definitely has its place and there are times where you need to go hard rounds at near 100 percent.

Nevertheless, going hard every roll is a recipe for getting stuck at BJJ white belt.

These days, most coaches know that consistent drilling is the key to technical improvement in BJJ.

Nevertheless, if you broke down the actual active time in minutes spent on drilling vs free live rolling, I would bet that a significant number of BJJ players end up spending most of their training time going live.

Lack of drilling time is guaranteed to stall you at the BJJ white belt level.

Perhaps one of your class times is open mat and most people just want to roll.  Maybe you spend more time sitting and talking rather than focused drilling during the class lesson.

Perhaps your coach allocates most of the time to live rolling.

Whatever the reason, lack of sufficient drilling time can be a big factor in getting stuck at BJJ white belt.

Scroll through popular BJJ Instagram feeds and you will be captivated by the huge number of technique videos, breakdowns, and coaching programs.

While there is nothing wrong with learning techniques from Instagram or any resource for that matter, it is important to build up a solid base of fundamentals in order to understand the context and purpose of any given technique.

Imanari rolls look cool, but if you have no game plan or effectiveness with traditional open guard games like butterfly and tripod sweeps, then you really should focus on that stuff first.

You will never impose a fancy game on your opponent if you can’t threaten him with the fundamentals.

Beyond flashy BJJ moves, most new players have unrealistic expectations of what they can achieve in the weightlifting gym while training a ton of BJJ.

Unless you are gifted genetically, athletically, or chemically, you aren’t going to add 10 pounds of muscle, increase your squat to 400, and be ready for your first tournament in 8 weeks.

In my opinion, everyone can benefit from lifting weights and doing off the mat conditioning, but it needs to be geared towards maximizing mat time and fitness.

But if you are too sore to train because you are squatting heavy three times a week, you will not improve as steadily at BJJ compared to the athlete doing two days of moderate weight training whose body can keep up with four BJJ practices.

If you are dead set on hail mary-ing the last thing that was on your IG feed or training powerlifting and BJJ at the same time… that’s fine.

Just know that it may affect the rate of grappling progression.

There is no denying the satisfaction and pride of tying a blue belt around your waist.  It is the first big public acknowledgment of your efforts, progress, and commitment to the sport.

Nevertheless, many BJJ white belts get too focused on getting the promotion itself and lose sight of the bigger picture.

BJJ is a journey with no end.

The rush of the promotion will wear off, and before you know it you are still at the bottom of the totem pole.

The belt is meaningless unless you actually enjoy the practice that brought you to it.  While you should certainly take pride in every promotion, learning to enjoy each and every part of the training process is ultimately what will keep you from getting burned out and stuck in jiu jitsu.

If you are forcing yourself to go to BJJ because you “really want to be a blue belt,” it may well be an uphill battle.

Relax and Enjoy the Journey

At the end of the day, if you are training BJJ because you love it and you are at a good school, you really shouldn’t be worried.

The belts will come with time and experience. Enjoy every step of the journey and savor each experience at every belt.

You don’t owe it to anyone to do BJJ except yourself if you truly enjoy it.  If you get discouraged or feel stuck, reflect on why you are really training.

The Advanced Basics for your Foundation of Jiu Jitsu

If you feel like you’re lacking solid fundamentals, then you need to start with Henry Akins’ White to Blue Belt program.

Here’s why: This program lays the foundation to execute the fundamental techniques of Jiu-Jitsu with maximum effectiveness and efficiency, against the highest levels of skill.

By week 58, you will have a deep understanding of the hidden forces – like connection and weight distribution – that allow the masters of Jiu-Jitsu to completely dominate the competition with “White Belt” techniques.