Home BJJ Techniques These Chokes are About More than Street Cred 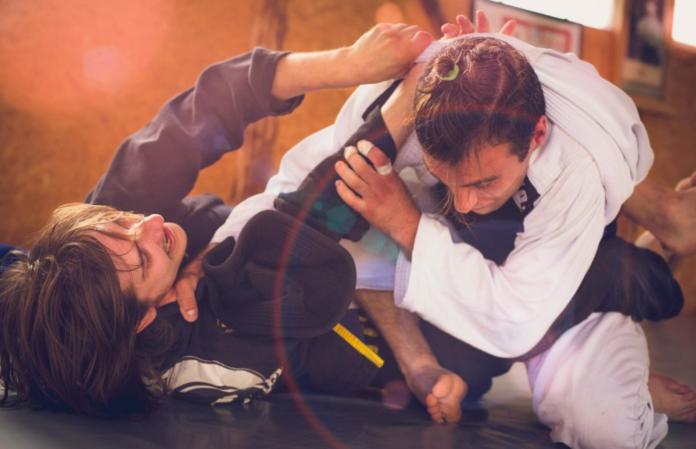 The art of Brazilian jiu jitsu (BJJ), is applicable and beneficial in a surprising number of arenas, some of which could even be life or death scenarios. It is easy to forget or lose sight of the fact that BJJ was never intended as a method to initiate or engage violence. BJJ is at its core, actually designed to deflate, avoid and defend against violence. With the beautiful art of BJJ on display in renown arenas such as MMA fighting and other lofty platforms, the intent and origins of the practice can become muted.

The International Brazilian Jiu Jitsu Federation states, citing some historians, that “the gentle art” can be traced back to India, where it was practiced by Buddhist Monks.” This, according to the understanding of the Federation is how the focus of self-defense was derived. These non-violent souls developed means and techniques centered on balance and leverage opposed to strength and force. The art of jiu jitsu also enabled them to protect themselves without weapons.

While Brazilian Jiu Jitsu is born of jiu jitsu, BJJ originates from Japan.  GracieMag called BJJ, “a martial art of Japanese origin in which one essentially uses levers, torsions and pressure in order to take one’s opponent to the ground and dominate them.” Again, this “gentle art” expresses no focus on kicks or strikes. Much of this is inherent to jui jitsu’s focus of allowing a smaller individual to defend themselves against larger and stronger opponents.

This can be evidenced in a variety of choke holds that can thwart the attempts of an attacker or on occasion, disarm a potential threat without traditionally violent methods. Look at a few of these chokes below and also note of the absence of any striking or kicking requirements at any stage of these movements…

Part of jiu jitsu training involves learning to relax using such practices like breathing techniques. This will keep you calmer and improve your mental clarity, which will pay dividends in the event of a confrontation or attack. A clear head and a sharp mind are vital to performing the bamboo choke. If your attacker rushes you and proceeds to push you into a wooded area, a focused mind will remember to look for resources such as a branch or piece of bamboo. Grabbing that piece of bamboo with a reverse grip and placing that hand on the enemy’s shoulder while blocking sets this choke up. Now, simply reach through and under your other arm to grab the other side of the stick, pulling your attacker close and bringing bedtime even closer.

If your attacker strikes in a parking lot and manages to knock you to the ground, once more a confident and calm response will prevail, despite the grim outlook from the onset. Sometimes the perpetrator will provide all the resources you need. With the attacker on top of you, reach over and grab the back of their t-shirt, while pulling it over their head reach across and under the attacker’s chin reaching through the collar of the shirt. From this point it is just a matter of clinching the shirt and drawing the enemy close and tight for a nap.

The sleave choke is advantageous if you see your attacker coming because you can use the sleeve of the shirt you are wearing or the sleeve of the attacker if your aren’t wearing long sleeves per say. Suppose you are at a party or you are walking across the parking lot to your vehicle. You have a moment or two as you see someone approaching with obvious bad intentions. Pull the sleeve of your shirt and twist to create a type of rope as they close in. Take the initiative and use the element of surprise if you can, maybe by stepping toward your attacker or turning as if you are going to run away. Using the arm and sleeve being used as a rope while holding the end of the sleeve with the other hand, bring that arm across the face of the enemy wrapping the rope constructed sleeve over their head. Bring your hands tight together as you pull your opponent tight to your chest – you can ask them what their issue was with you after they wake up.

Sometimes staying safe demands being proactive. The handshake choke is a good bet to get you out of an inevitably hostile situation safely. Extend your hand for a handshake and proceed to grab and pull the sleeve of your adversary. As before, pull the sleeve, double grip it and wrap it over the head of your enemy.

The Real World and BJJ

As impressive and amazing as the BJJ fighters and UFC athletes are today, they will never pose the same scary threat as the violence and crime on the streets. The street is much more dangerous and unpredictable. These proven techniques in the hands of an earnest jui jitsu practitioner will keep them out of trouble if they run into an altercation out in town. It will definitely give you street cred and like those professional athletes it could earn you a reputation. While all of that fanfare may or may not be welcomed or appreciated, what you will appreciate is having these chokes in your back pocket if that day ever arrives!

Jiu Jitsu is here to make us better, make our lives better and to empower us to defend ourselves, that is what Brazilian Jiu Jitsu looks like in the real world. This is about more than street cred, this is about living the best life we can and staying safe and that is just what BJJ enables us to do.