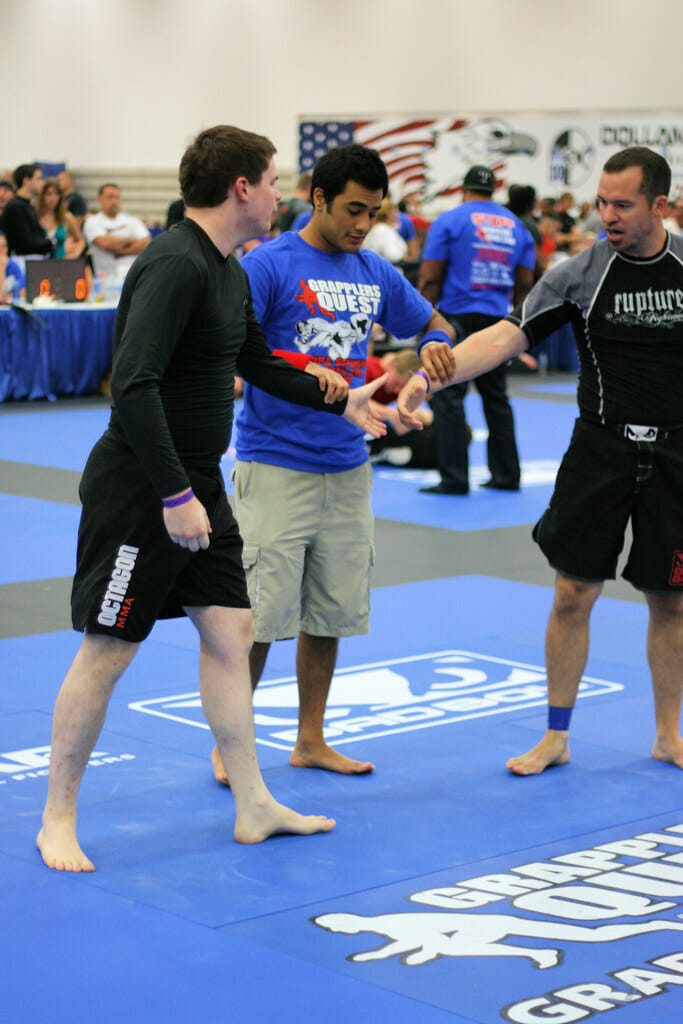 If you’ve attended your first BJJ class, there’s a chance you heard the word ‘Oss’ spoken out loud.  ‘Oss’ is a common term thrown around within certain BJJ subcultures.  While most people don’t know the origin of ‘Oss,’ it’s often used in quite a few contexts.

In this article, we break down the possible origins of ‘Oss’ in BJJ.  We will discuss how and when it is used.  Finally, we will answer the question of whether you should be saying Oss, if ever.

The Origins of ‘Oss’ in BJJ

There are a few prevailing theories of the origin of the term ‘Oss.’  Each possible root of the ‘Oss’ in BJJ comes from a longer Japanese phrase used in various contexts.  Given the roots of BJJ in Japanese judo and jujutsu, this is not surprising.  I’m not personally one of those Japanese culture martial arts guys – nor do I speak any Japanese – so you’ll have to forgive me ahead of time if I get the details wrong.  With that said, the following are a few possible origin phrases for ‘Oss.’

The first theory of ‘Oss’ in BJJ is a combination of characters from the phrase ‘Osu Shinobu,’ which translates to ‘push’ ‘control,’ or ‘endure.’  The phrase may have originated Samurai culture and got transferred into Kyokushin karate.  Kyokushin in known for being a very ‘hard style’ of karate, and the phrase refers to the need to endure and embrace the intensity of training required for success.  The two characters together came to symbolize ‘combat spirit,’ and are repeated to remind practitioners of the need to overcome all obstacles throughout their training.

If we follow this theory, its possible that ‘oss’ made its way through Japanese martial arts culture into judo, and subsequently Brazilian Jiu Jitsu.

Another theory is that ‘Oss’ originated from the phrase ‘Onegai shimasu,’ which roughly translates to ‘please take care of me.’  This phrase makes sense to say before rolling, given that your health and life are literally in your partner’s hands.

A third highly plausible ‘theory of Oss’ comes from Dr. Mizutani Osamu, a renowned language and linguistics professor.  He posits that ‘Oss’ may be a casual shortening of ‘Ohayo gozaimasu,’ which is a version of the phrase ‘good morning.’

In BJJ culture, ‘Oss’ is frequently used as a greeting, but is said in many contexts.

For example, students may say ‘Oss’ to each other when they see each other.

They might ‘Oss’ each other as they slap hands before rolling.

You might even hear them say it as congratulations on victory in competition or promotion to the next rank.

In fact, if you are training at an ‘Oss’ school, you can pretty much get away with saying it whenever.

Some BJJ schools are entirely devoid of ‘Ossing,’ and you might get a sideways look or smirk if you say it.  If you don’t hear the phrase used in the first 15 minutes in the dojo, its probably not an ‘Oss’ school.

Should you be saying Oss? (probably not)

I first started BJJ at a traditional school in another country.

The instructors were amazing, and it had a great subculture of camaraderie.

As a brand new white belt, I took to the phrase like white-on-rice.  I said it constantly.  I probably overdid it.

When I returned to the United States, the first school I trained at was not an ‘Oss’ school, and I quickly abandoned the phrase.

However, another school I I ended up cross training at was, in fact, an ‘oss’ school.

They said ‘Oss’ and nearly every variation of ‘Oss’ you can think of such as:

No disrespect, but looking back after years of training at far superior dojangs, this school was weird AF…

Now that I’ve been a serial ‘creonte’ at many different BJJ schools, I can confidently say that ‘Oss’ seems to be not that common in the United States, although I’m sure this depends on the exact affiliation and lineage of your BJJ school.

Given the respect I have for the amazing BJJ school in which I began my journey, I will not generalize about ‘Ossing.’  That being said, I would recommend not saying ‘Oss’ unless you are 100% certain you are at an ‘Oss’ dojo, especially if you don’t have a Brazilian accent. 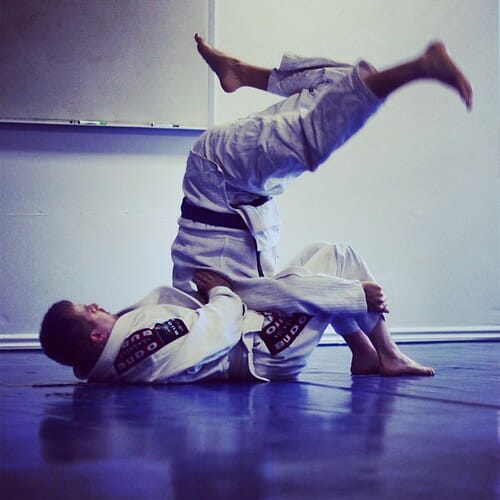 Even in that case, try not to be the person who says ‘Oss’ in every other sentence.

These days, I pretty much only say ‘Oss’ out of respect if an opponent in a match says it first either before or after we roll.  Furthermore, in terms of the origins in Japanese culture, it appears that you would almost never say ‘Oss’ in Japanese culture to anyone who outranked you in age or belt grade.

At risk of being lampooned, I’m going to go out on a limb and say that the obsession with adherence to traditional martial arts culture in America, even if used in the proper context, should probably be abandoned when it comes to modern martial arts training.

It’s even worse when a phrase is hijacked and overused.  To me, martial arts are a series of techniques used to win fights – the cultural component is secondary.

the excess bowing, phrasing, and especially ‘Ossing’ is as silly as people throwing ‘shakas’ and fist bumps out of ‘respect for the culture…’

I’ve never been big on the cultural aspects of any art form really.  That’s probably why I fit in at 10th Planet.

I really think that the excess bowing, phrasing, and especially ‘Ossing’ would be as silly as looking at people throwing ‘shakas’ and fist bumps out of ‘respect for the culture…’

Nevertheless, I fully respect people who find meaning in tradition, and I am a firm believer in free speech.

That being said, most people I train with, including high-level black belts, would probably roll their eyes if you said it more than once or twice per class.  Or ever.

The Paleo Diet for Jiu Jitsu?