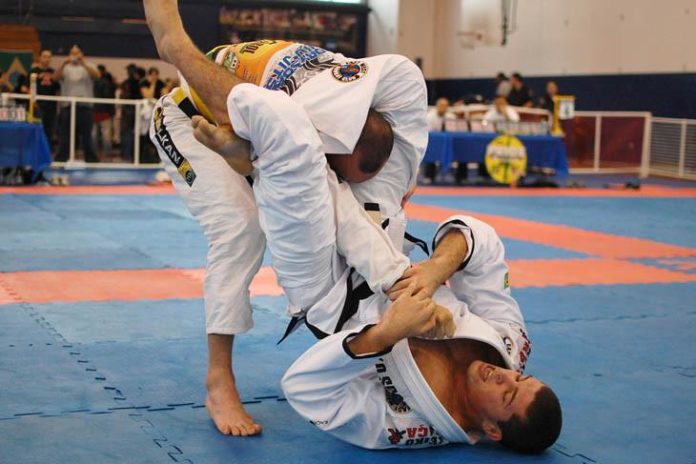 Submitting your opponent is the ultimate victory in Brazilian Jiu-Jitsu.  If you read our last article on the fundamental positions in BJJ, you probably understand our guiding philosophy.  Old-school fundamental BJJ wins fights.  In fact, many of the ‘basic’ submissions you learn as a white belt will be submissions you win (and lose) with at the highest level of your BJJ game.

Most BJJ beginners are eager to learn submissions and begin tapping people out.  However, there is nothing basic about finishing any submission.   Submitting a reasonably skilled opponent is an advanced topic in of itself.

Even submissions that seem ‘basic,’ such as the classic rear-naked choke, require many detailed steps to consistently finish opponents.

Once your opponent knows how to stay calm, avoid mistakes, and understands basic defensive maneuvers, finishing submissions becomes a nightmare.

If you’re a new BJJ player, you will likely begin learning basic submissions early into your training career.  There is absolutely nothing wrong with attempting your own submissions using your newfound knowledge.  However, the true first step toward ‘learning’ submissions is understanding how to survive and defend them.

The list of submissions and their variations in BJJ is almost endless.  Nevertheless, there are some common submissions available from the basic positions that you must begin learning to defend and attack to build a solid BJJ foundation.

You must become familiar with armbars from the top and bottom positions, the key-lock positions such as the kimura and Americana, the rear-naked choke, triangle choke, and guillotine.

The classic armbars from the guard and mounted armbars are often one of the first submissions you will learn as a beginner.  The finishing details vary greatly depending on the specifics of the position and the style of each player.

The break occurs when the attacker falls back and/or extends the hips.  This hyperextends the opponent’s elbow using the crotch and lower abdominal area as a fulcrum.

As a beginner, the first step is understanding how to survive and defend the armbar by relieving pressure on the elbow, removing the leg from your face to stop the posture control, and from there, posturing up and pulling your arm out.

Understanding the mechanics of the armbar is vital for getting these steps right.

Learning the defense and escape sequence for the armbar makes you far more deadly when attacking your own armbar submissions.  The more you understand the angles and moves your opponent needs to make to escape, the better you can prepare for those counters.  You will also learn to ride-out useless spazzing attempts to “muscle out” of the position. 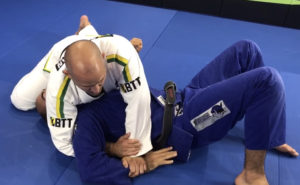 Keylock submissions are another vital category of finishes you need to master in BJJ. The four-figure Kimura and Americana grips offer excellent control leverage as well as the opportunity to tap out your opponent.  Their simplicity and availability from both top and bottom warrants learning about them as a BJJ beginner.  Any BJJ player worth their salt will attack the Kimura and Americana if the opportunity presents itself.

The Kimura grip is available from both top and bottom positions.  A versatile grip, the Kimura can be used to escape and reverse positions in addition to getting the tap itself.  It involves a figure-four grip on the opponent’s wrist.  One of your hands must control the opponent’s wrist while the other arm wraps around the opponent’s triceps.  You weave the triceps-arm through to grab your own wrist on the opposite hand.

This figure-four lock allows a powerful lever to rotate the shoulder past its safe range-of-motion.  This will force the opponent to either turn the entire body to relieve the pressure or tap out if they cannot continue turning.

The Americana is similar in concept to the kimura but is generally available from top positions.  The Americana rotates the shoulder in the opposite direction as the Kimura using a similar figure-four grip.

The most important aspect of defending figure-four shoulder locks is knowing how to prevent your opponent from securing the grip.  Keeping elbows tight to the body prevents most opponents from easily securing the grip.  The keylock submissions are very difficult to finish without a tightly secured grip. 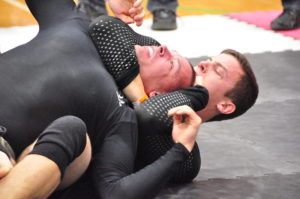 In many ways, the rear-naked choke is the poster-child finish for any grappling situation.  It works in BJJ, MMA, and real-world fighting because it allows the attacker to almost 100% safe and cut off the blood flow to the opponent’s brain at the same time.  This makes it an incredibly deadly submission that will work on essentially anyone, regardless of size or strength.

You will always attack the rear-naked choke attack from the back mount control.  As the defending player, avoiding the RNC is the top priority. To get the rear-naked choke, the attacker weaves their choking arm under the opponent’s chin. For the classic RNC finishing method, the choking hand grips the bicep of the opposite arm.  From there, the non-choking hand will push the opponent’s head deeper into the choke, making for a nasty finish.

The first line of defense to being choked is to protect your neck with your hands.  If you can establish the crossed-arm back defense Henry Akins teaches in his fundamentals courses, your attacker will be a few steps behind and you can begin working towards an escape.

The triangle choke is a head-and-arm choke performed by locking your legs around your opponent’s neck with a single arm trapped in the space between your thigh and their neck.

You can attack the triangle from both top and bottom positions.  The triangle is an incredibly technical move to finish.  As the defender, understanding how to avoid being triangled by keeping ‘both arms in’ or ‘both arms out’ when in the opponent’s guard is the first lesson when it comes to dealing with triangles.

Once you know how to get your opponent into ‘triangle trouble’ with one arm in the lock, you can hone-in on cutting the angles required for consistent submissions via triangle choke.

You will learn advanced set-ups to attack the triangle as your progress, however avoiding the ‘one-arm-in’ position required for every traditional triangle choke is the first step in understanding this dangerous submission.

The Guillotine: Countering Wrestlers with BJJ 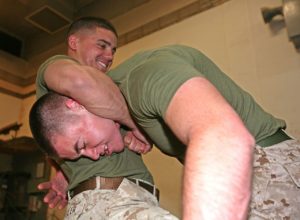 The guillotine choke is similar to the rear-naked choke in its instinctiveness and obvious danger.  This attack involves wrapping-up the opponent’s neck with one arm with their head in your armpit and finishing the choke by applying pressure under the chin.

There are a number of guillotine variations depending on the exact position you find yourself. The guillotine is commonly seen when the attacking player stuffs a shot during wrestling engagements when the shooting player keeps their head too low and exposes the neck.

Learning how to take shots as safely as possible with good posture and minimal neck exposure is the first step towards avoiding this choke.  If you find yourself wrapped up in a guillotine, you must understand the head and chin angle required for the finish, as well as the hand fighting options to create space in order to survive the choke attempt.

As with all submissions, finishing the guillotine is an art.  Despite its apparent simplicity, without understanding how to properly apply the pressure for the finish, you’ll end up just squeezing your opponent’s head.  It will annoy them but won’t be enough to make them tap.

Develop A Respected Game by Mastering the Fundamentals

With the ever-growing amount of flashy highlight reels and new submission variations, its easy to overlook the fundamentals that make BJJ effective against nearly anyone.

The most respected old-school masters developed a keen and nuanced understanding of the fundamental BJJ submissions.  While these submissions are frequently taught as ‘BJJ 101,’ they take years and decades to truly master.  Learning the deep ins-and-outs of a few foundational BJJ submissions will in the long run make you far more deadly than chasing every new flashy variation.

We highly recommend checking out the Henry Akins curriculum to learn the fundamental BJJ skills that will make your Jiujitsu respected at all levels of the game.