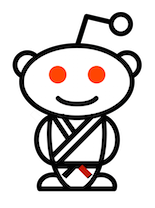 Ah, Reddit BJJ, aka subreddit or simply r/bjj. A strange fusion of everybody you’ve ever trained with. It’s your mentor, your training partner, the guy you can’t stand, and the new kid who just said something incredibly stupid. All at the same time.

The r/bjj subreddit has become a staple of the community. It’s sounds silly to even say this, but it’s kind of like the morning paper. We check it once a day to get our daily fix of competition news, techniques, debates, and comedy.

If you had to describe the tone of r/bjj, it would be irreverent. For long time users, they’ve seen it all. Everything becomes, sort of a joke. If nothing else, reddit bjj forces most of us to not take training too seriously.

Personally, I’ve given up on thinking of r/bjj as a place where anyone is going to have the deep, intellectual discussions about the BJJ lifestyle. That’s what beers after training is for. Reddit is at it’s best when it’s reminding us how ridiculous our own people can be. And for that, it’s possibly the best thing ever.

Here’s ten of our very favorite posts on the BJJ subreddit (yes, we included some of the comments), you’ll see what we mean:

5) I’m Just Saying I Have Questions, That’s All.

2) BJJ Has Changed, You Wouldn’t Even Recognize It Now.

1) Thanks for that imagery

If you’re ready (willing?) to take a look at r/bjj yourself, check it out here. They’ve also done some good things for the bjj community, such as keeping the BJJ_Steroids story alive at the 2019 IBJJF Worlds.