A recent post in the BJJ Fanatics Facebook group about a two-stripe white belt bragging about submitting a two-stripe purple belt has sparked lively discussion online about the topic of lower belts tapping upper belts.

The consensus is that the white belt should probably calm down, check their ego, and consider not bragging on social media about non-achievements in BJJ. 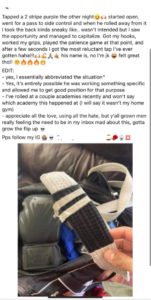 First and foremost, let’s congratulate the white belt on their accomplishment. Getting a purple belt to tap to a submission means you probably pulled-off a proper submission. Good for you.

Upper belts are not always playing their ‘A-game’

Now for the criticism. The general, generic criticism about tapping out anyone during non-competition rolls, in particular someone who significantly outranks you, is that you really cannot assume the upper belt was playing their ‘A’ game.

As a white belt, you probably have a few things you are learning to be good at, and you are primarily focusing on getting position or submissions however you can. In essence, the only game you have is your ‘A’ game.

By the time someone reaches the purple belt level, they probably have an ‘A’ game they are confident with. Most likely, there are a few paths, positions, and submissions they can execute at a high-level.

However, there are still numerous holes in their game and techniques that they only have a white belt understanding of. There is a reason a purple belt is considered *roughly* halfway to black belt.

The only way a purple belt can improve these holes is to *not* play their A-game.

Speaking as a purple belt, there are a few paths I can pull off on many people, including, at times, individuals who outrank me.

However, there are other positions that blue belts, and perhaps even a few white belts, have more experience with than I do. In order for me to improve, I have to decide not to perform my go-to techniques and limit myself to trying the techniques I currently suck at.

When I do this, I get passed.

I get put in uncomfortable, dangerous positions.

And yes, I sometimes end up getting submitted, including, once or twice, by white belts.

It is simply a reality in BJJ that you can be incredibly proficient in one domain, such as passing from standing and yet completely lack a competent understanding of another key area of BJJ, such as front headlock submissions (I am guilty of this).

Training with lower belts is a chance to experiment with weaker positions on an opponent who may be closer to my level in those positions despite me overall outranking them and having a better grasp of BJJ.

If the lower belt catches me, great!

I can reflect on what went wrong and improve my technique.

However, if my goal was to dominate or submit someone I outrank, I would have gone for the techniques I am more comfortable with. I’m not saying you shouldn’t privately celebrate the fact that you are getting better at submissions, but you should probably keep it to yourself and understand the context for what happened.

What if you are actually better than the upper belt?

I am not going to pretend to know every detail about the individuals involved in this reported ‘incident.’ There is always a chance that you *could* be better, stronger, faster, or just more on-it during that roll on that day.

Maybe the other academy has lower ranking standards.

Maybe the other student has achieved a lot in competition at their respective weight class or overcame some other limitation, such that their coach decided to promote them.

Without knowing more details, it is difficult to say.

The bottom line is that openly bragging about tapping out a higher belt during a non-competition roll will never earn the respect of the wider community, even if you impress your friends and family.

Speaking to everyone of all ranks, myself included, please do not read too much into the fact that you tapped out an upper belt.

But don’t take it from me, let’s see what Chewy has to say on this overall subject.