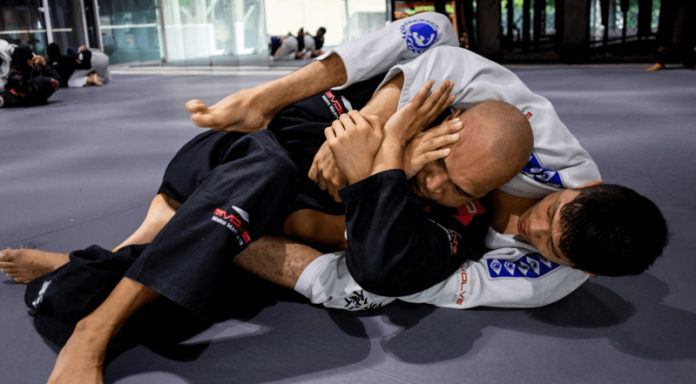 If you’ve ever rolled with a brand-new athletic guy in BJJ, you likely had the ‘spazzy white belt’ experience.  People of all belt levels, in particular, more experienced white belts and blue belts, often complain about ‘spazzy white belts.’  New BJJ people who use a lot of strength and attempt grips and submissions that are less than technical can be annoying.  However, if you are serious about being good at BJJ, you need to stop complaining and improve your BJJ enough to actually deal with them.

What is a ‘Spazzy White Belt?’

The term ‘spazzy white belt’ is thrown around quite often.

But what does it mean?

Perfectly executed BJJ does not require excessive strength.  Position, angles, and leverage allow you to apply large amounts of pressure and torque to your opponent without the need for lots of exertion.

Of course, two experienced, equally skilled practitioners can give each other a hell-of-a-time battling for position.  That said, they are only going to exert effort on the specific battles that matter most from any position.

There are many breeds of spazzy white belt.  The classic example is a larger, muscle-bound new guy who over-grips, tries to bare-hand strangle you, or attempts a kimura from closed-guard.  Specifically, while he is in your closed guard.

If you are not careful, a guy like this may pull off an armbar from a position that he ‘shouldn’t.’  You may take a knee to the face as they try to recover guard.  Even dealing with an excessive-but-futile grip from poor positioning can stall out the roll and frustrate you.

Other varieties of ‘spazz’ include white belts who learn a leg lock or two and suddenly start diving for imanari rolls every time the round starts.  Maybe you get the guy who flails around and accidentally bitch-slaps you as you attempt your moves.

Regardless of the specific breed, a ‘spazzy white belt’ is anyone who uses too much strength or chaotic movement without actually going for good positions or ‘real’ submissions.

Why ‘Spazzy White Belts’ Piss Everyone Off

As we get comfortable with our BJJ gym and training partners, we often fall into similar patterns during rolls.

Perhaps you’ve been working on your butterfly guard and you have a great dynamic with your training partner trying to pass.  Your partner knows what they need to do to pass.  You know what they are trying to do.  From there, you try to trick each other based on familiarity with each other’s game.

Another pattern is the unspoken ‘agreement’ in BJJ that one person will play guard and the other tries to pass.  Whether it’s due to lack of mat space or shitty wrestling ability (or both), during most casual rolls people just want to get into the depth of BJJ and don’t actually try to battle for the initial top position.

In comes the ‘spazzy white belt.’

This guy or gal doesn’t know about playing guard.

They do not have a game plan.

They sure as hell do not know where the battle lies from any position.

All they know is that whatever you try to do, they are going to resist will all their strength.

They may go for a submission they don’t understand and squeeze hard enough to hurt but not enough to tap.

In either case, they are breaking the pattern that you’ve become accustomed to rolling with more experienced BJJ players.  They may actually be harder for you to sweep, pass, or submit simply because they don’t give the reactions you are used to.

Worst case, you may come away with some scratches or bruises when they accidentally kick or slap you.

Regardless, they interrupt your precious ‘flow’ and piss you off.  They make you feel inadequate.

After all, BJJ is supposed to be about good technique beating bad technique… right?

How to Deal with Spazzy White Belts

Can you imagine telling Grandmaster Helio or Rickson ‘Sir – the guy didn’t know BJJ, what was I supposed to do?’

One of the biggest problems with getting ‘mad’ or avoiding spazzy white belts is that you ultimately are ignoring the very purpose of BJJ.

Can you imagine getting into a street fight back in the day, losing, and telling Grandmaster Helio or Rickson ‘Sir – the guy didn’t know BJJ, what was I supposed to do?’

Yeah… that’s what we thought.

While it is great to get into epic technique battles or beautiful flows with long-time training partners, if your BJJ does not work on someone who does not know BJJ, you are kind of missing the point.

The bottom line is this: if spazzy white belts make you angry or give you problems, you need to reflect on what you are doing wrong.

You probably have the technique you need to beat them.  But your mind and reactions have gotten too complacent.  You are assuming someone will react the way you want or play the game you are used to playing.

Most of us like to think our BJJ is useful for self-defense.  But if you cannot handle a tough-but-new guy spazzing out, perhaps it’s time to re-think some of your game plans.

Go back to the basics.

You need to have a few options from each position that do not depend on people doing the technically correct reaction.

Additionally, identify positions that nullify explosive strength.  For example, the back-take.  If you are on someone’s back, their size and strength are less important than other ‘dominant’ positions you can get.

Work on a few moves that allow you to get to your preferred position and hone your submission details against someone who only knows how to grip and stall.

Finally, we recommend toughening up mentally to deal with spazzy white belts.  You cannot blame someone for beating you or even frustrating you.  Particularly if they do not actually know much BJJ.

Check your ego and focus on your game.  It will improve your BJJ for ‘the streets’ and make you a stronger player overall.

Should You Ever Not Roll with Spazzy White Belts?

Rolling with newer, stronger people is vital for your long-term BJJ growth and development.  However, there may be situations when rolling with spazzes is not the right choice.

For example, if you are preparing for higher-level competition, you can expect your opponent will try to technically counter your BJJ.  Particularly in weight-class tournaments, it’s probably best to roll with people of similar size and similar or better skill than your expected opponent.

This is meant to hone your competition-specific technique and avoid any potential tweaks you might get from spazzy white belts.

BJJ is a great martial art for women looking for self-defense.  However, it takes a good amount of time before your technique will reliably allow you to dominate bigger, stronger men without risking injury.

Sometimes, the ego of a new guy getting tapped by a smaller woman may cause him to spazz out even harder.  You might still win, but you could get injured.  In the long run, you will develop the technique to safely handle this type of guy.  Furthermore, if a man is consistently injuring female partners, he will probably get a talking-to and possibly beat-down by the experienced players or coaches at the gym.

If you are training for self-defense as a smaller woman, you need the experience of training hard against bigger dudes.  However, during your initial training, its probably best to stick with experienced BJJ players or other women to avoid injury.

Embrace the Spazz and Improve Your Game

As we have discussed, learning to deal with and submit spazzy white belts is vital to having good BJJ.  The martial art itself is fundamentally meant to deal with stronger but inexperienced players.

While the BJJ journey is infinitely deep as you engage with increasingly skilled players, if you can’t beat a new guy just because he’s strong and spazzy, you need to work on your fundamentals.

Here’s the 5 Reasons Why You’re Going To Be Painfully Stuck...