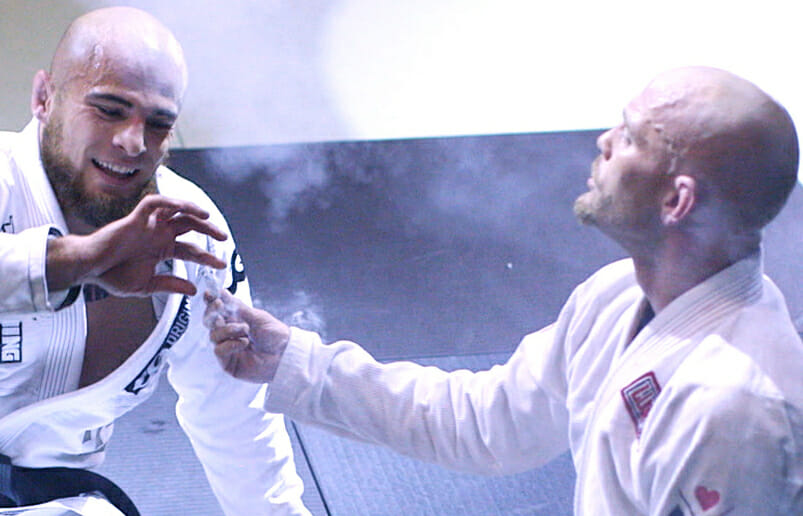 Have you ever wondered what it would be like to do jiu jitsu while high?  Well, you certainly aren’t the only one. A search through BJJ forums and reddit posts reveals that many new players are curious as to whether using cannabis will impact their game.

As it turns out, cannabis use is actually a really big thing in the world of BJJ and MMA.  With the mainstreaming of cannabis culture in America and worldwide, a lot of high-level guys are openly discussing their cannabis use.

Do Black Belts Get High?

10th Planet Jiu Jitsu Founder and Black Belt Eddie Bravo is perhaps one of the most well-known BJJ advocates for cannabis.  In a 2009 interview with Fight Network, he gave the perfect Bravo-style breakdown of what he thinks about smoking weed:

We were all brought up believing that… the bullshit propaganda [sic]… I believed that pot made you stupid.. killed your brain… killed your lungs.  You hear it growing up, you know, from people you respect… your parents… your doctors… the police… they are [all] just brainwashed…

However Eddie Bravo is far from the only high-level guy who openly uses cannabis.  In a 2017 interview on “The Smokebox,” Kron Gracie smokes a joint with stoner icon B-Real of Cypress Hill. Kron and B-real discuss the preference for smoking flower rather than dabbing or vaping.

Kron Gracie advocates smoking Sativa strains during the day and Indica strains at night… but in true stoner fashion admits “you know… if you don’t have the sativas [sic], you’ll have to smoke what you got…”

While Kron certainly has some ‘out there’ views, there is no denying his prowess as a martial arts competitor. As such his endorsement of cannabis as a benefit to BJJ holds a good amount of weight given his martial arts record.

Perhaps the most prominent instance of cannabis entering BJJ pop culture is the High Rollerz Tournament.

Started by Big Lonn and Mighty Matt, the High Rollerz circuit is a tournament where competitors smoke cannabis before competing.  The winner of the black belt level matches walks home with a full pound of cannabis. Last year, it attracted a number of high level competitors.  Eddie Bravo was one of the main referees.

In reference to their goals for the tournament, the founders write:

“High Rollerz™ is a cannabis-infused Brazilian Jiu Jitsu tournament and show created by ‘Big Lonn’ Howard & ‘Mighty Matt’ Staudt. Our goal is to formally and responsibly merge the worlds of martial arts and cannabis and work towards de-stigmatizing this amazing substance through education and example… We also love and support jiu jitsu and all its practitioners. We seek to provide fun, alternative events while always keeping your respect as a well-run and legitimate promotion….”

Are there downsides to using weed?

Not everyone in the BJJ world is thrilled about the upswing of cannabis use in BJJ culture.  World competitor Rodrigo “Comprido” Medeiros firmly criticizes cannabis use, and specifically calls out Eddie Bravo for his promotion of cannabis as a performance-helping tool.  Medeiros does not believe that leading children and young people to believe that cannabis “isn’t that bad” is the right move, and he may have a point.  Nevertheless, with the increasingly popularity of cannabis in general, it is unlikely this trend will reverse.

So… Should you be rolling stoned?

Alright, so there’s high level BJJ guys getting high before and after training… but the question arises – should you be smoking weed and training?

There is no clear cut answer to this.  Cannabis affects everyone differently, so the specifics will vary individual to individual.  We know that cannabis can affect cognition to varying degrees, and if you’re smoking anything probably isn’t ideal, however that doesn’t necessarily mean you shouldn’t do it or that smoking is your only option to partake.  There are many good BJJ guys who usually train high, and there are many good BJJ guys who never train high.

If you go to class high and are unable to learn BJJ, focus on the moves, or stay safe, then probably rolling sober is the way to go.

On the other hand, many people feel more relaxed after using cannabis.  BJJ is supposed to fun, and for many people, it’s more fun when they’re high.  Ultimately if you train consistently and put the effort in, you will get better.

It’s up to you to be honest with yourself about how cannabis and anything else you put into your body will affect your training.

If you determine that cannabis is hindering your training goals, you should adjust accordingly.

On an ending note, if your head coach has a rule against using substances, including cannabis, before stepping on his or her mats, I suggest you stay sober or find another school.  Unless you are openly reeking of weed or clearly out of it, most coaches and practitioners aren’t going to care, or even know, that you are high.

Keep Skin Infections like Staph, Ringworm, and Athlete’s Foot out of...