Home Techniques Submissions It’s not the sexiest, but this is THE #1 Submission in Nogi...

Steve Jobs, the red belt of technology, once famous declared that simplicity is the highest form of sophistication. And while the technology of jiujitsu is rapidly advancing, some things seem to stand the test of time.

When it comes to nogi jiujitsu, your options are more limited. You need versatile attacks that you can play from many positions. That’s why the number one submission isn’t anything exotic or out of reach for you:

It’s the armbar, and it’s not even close.

Don’t believe me, look at the evidence. It’s a consistent finisher across all nogi formats. EBI, Combat Jiu-Jitsu, and ADCC. And while there are plenty of other high percentage submissions such as the triangle or the heel hook, here’s what makes the armbar different.

For many of us, the armbar is the first submission we learn. But unlike some positions and techniques that beginner’s dispense with over time, the armbar will stay relevant your whole career. You may meet people that confess triangles or kimuras aren’t high percentage for them. But have you ever met someone who doesn’t do armbars? Me neither.

“But have you ever met someone who doesn’t do armbars? Me neither.”

If you take a sub like the RNC, which is very high percentage, it can really only be applied from the back. Which means your RNC is only as good as your back taking.

Armbars can be hit from guard, mount, side control, and even the back. If you get good at armbars, you’re dangerous from many positions.

Always a Plan B

Failed armbars always lead into other submissions, and can lead into powerful submission chains that threaten your opponents.

From the guard, you have the armbar/triangle/collar choke sequence.

In side control, you have the armbar, kimura, americana attack. And in the mount, a failed armbar can lead to a back take, a triangle, or even an omoplata. Armbars lend them selves to combos due to one powerful concept:

Anytime the elbow is separated from the body, submissions are likely.

The armbar is also very high percentage with a gi on. It leads itself to even more combinations with grips.

So if you invest in armbar attacks, you’re going to get a high rate of return from them.

Of course, YOU may have another high percentage submission in nogi jiu-jitsu. Let us know what it is! 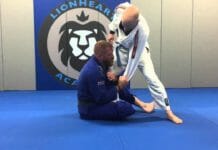 If You Like Half Guard, You’ll Love Sit Up Guard

The Meaning of ‘Oss’ in BJJ: An Irreverent Take Saying ‘Oss’...

BJJ vs Krav Maga: Sport of Self Defense?