Home Techniques Open Guard If You Like Half Guard, You’ll Love Sit Up Guard 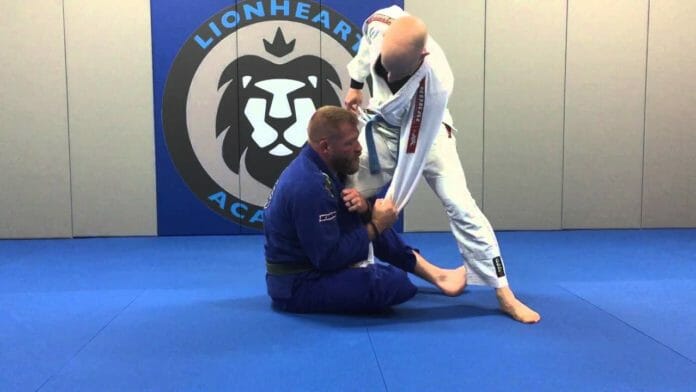 Here’s a fun guard that goes by a few different names. Sitting half guard, sitting guard, or the sit up guard. It’s a guard that relies on hugging a standing opponent’s leg.

This guard is strong for off balancing an opponent for a sweep. It’s a classic “your whole body against a part of their body” technique. It’s also a positional crossroad. You can go in many different directions from it. If you want to take the fight down to the ground, you can pull them down to your half guard or lockdown. You can also employ a number of sweeps, or even stand for a single leg. Hell, you can even take the back from this position.

The sit up guard is especially handy if you play half guard. When people stand up in your guard, the transition to sit up guard is very natural. Below is a video roundup of some great teachers showing options from this position.

Proof That It Works

Let’s open with a BJJ Scout video illustrating through competition footage that BJJ world champions are using this guard to sweep high level opponents. He repeatedly shows household names like Cobrinha and Octavio Sousa using the guard to stand into single leg takedowns.

If you’re small, or just ready to get fancy, Kurt Osiander has a great rolling transition from sit up guard to x-guard. Kurt swears it’s “so easy even I can do it.” In true Kurt fashion, he ends the video with a “F**k you ISIS. Go f**king train.”

Lucas Lepri shows the finer points of gripwork from the sit up guard. He uses the position to arm drag into a back take. His training partner in the video is a very young Kennedy Maciel, before he was the black belt killer cleaning house at the Pam Ams and Abu Dahbi Worlds.

I loves me some Chewjitsu, and I saved the best for last with a simple sit up guard trip that’ll get you on top. Chewie utilizes a simple trip, but you can also stand for a more traditional single leg.

My last plug for this guard position is that even if you do nothing but hold on, it will often frustrate opponents and maybe even off balance them enough for a sweep. Try it out for a few rolls and see what happens.

If you want more guard goodness, check out this article on why you need a guard for every range.

Also, I recently became a Jiu-Jitsu Times contributor! Here’s a link to my first article for them.

It’s not the sexiest, but this is THE #1 Submission in Nogi Jiujitsu