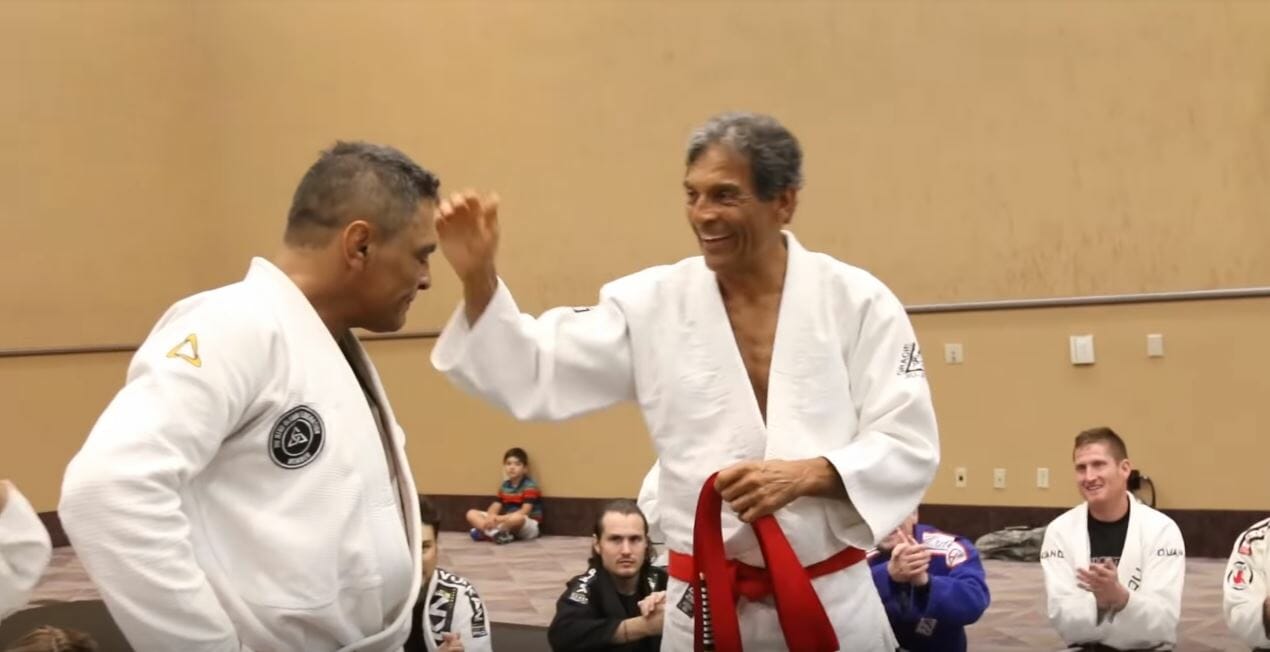 A few years ago jiu-jitsu fans were given a real treat. A feel good moment that quickly made the rounds across the internet. Rickson Gracie, one of the most beloved figures in the art, was awarded his red belt, making him one of a handful of men alive to earn the rank. What’s more, he was promoted by his older brother Rorion, along with an Avengers-caliber team of black and coral belts. It was all filmed, and it seemed to be a touching moment between brothers. At least, on the outside.

But as the weeks ticked on, it became clear that Master Rickson wasn’t wearing his new belt. When asked at a seminar about it, he gave a delicate answer: the decision to promote should be made by a plurality of BJJ leadership.

This prompted an awkward discussion in the BJJ community. Not about Rickson’s worthiness of the belt, which was universally supported. Rather, it was about what a BJJ red belt actually is, and who can give them. The more voices that joined the conversation, the more it became clear that we don’t really know.

When Rickson explained his reluctance to wear the belt, he made the point that a senior council of some sort should be making the decision to award such a high honor. Such a “council” doesn’t currently exist and Rickson hinted that his goal is to create one, via his new organization, the Jiu-Jitsu Global Federation (JJGF).

Which raises a new question: Do we really need yet another BJJ governing body, claiming to be the one true standard by which everyone should follow?

Rickson was promoted by Rorion and an informal group of community leaders such as Pedro Sauer, Fabio Santos, and Jean Jacques Machado. While most of these masters are technically a part of the IBJJF, they mainly affiliate with the lose confederation of Helio Gracie students. Helio Gracie himself was famous for tolerating the IBJJF, while ignoring and snubbing them many times.

Although Helio never truly created a competing organization, his army of students kept his tradition of doing their own thing. Helio himself set his academy rules about when students were eligible for various ranks. He also broke them many times, often awarding degrees outside his own time requirements to promising students. Rorion continued the tradition, awarding himself a red belt after his father’s passing, making the fabled red belt akin to a crown that is passed from father to son.

Then there’s the elephant in the room: the IBJJF. An organization that has actually laid out BJJ red belt requirements based on time requirements, and stuck to them. And while they’ve never been able to get the whole community to fall in line, they definitely hold most of the market share when it comes to a rule set and belt standards. It’s not like their belt requirements are terribly unreasonable. They reward time in and service to the community. A lot of time in. As it should be.

So why can’t we just pick something and stick to it?

Really, the problem with the red belt isn’t that we can’t agree on requirements, it’s that too many people want the honor of awarding them. After all, ceding that IBJJF officially controls who does and doesn’t get promoted to red or even coral belt, would be essentially admitting that they are the highest authority in the art. For some in the Gracie clan, they may politely tolerate the organization founded by Carlos Gracie Jr., as long as it doesn’t tell them what to do.

It’s this same politeness that makes understanding the upper echelon of BJJ so confusing for regular students. Depending on where you go, you get entirely different re-tellings of history, with key names left out entirely. It’s why most people would be surprised when they learn just how many red belts there are, or that many of the names on the list are people largely unknown in America.

Depending on which database you check, major names are missing from various authoritative red belt databases. Legends like Rorion Gracie and Pedro Valante Sr. aren’t even on the list of red belts at BJJ Heroes. Similarly, Gracie University’s red belt database has just five names in it. And IBJJF? Not a single member of the Helio Gracie clan can be found on it, although it has a few Helio Gracie black belts such as Grand Master Mansor.

“Who cares?” You might ask. The belt doesn’t matter anyways. Maybe not, but the history does. And that’s what the red belt is in danger of becoming, just another tool in the war for the BJJ history books, where we acknowledge some of the greats, but let others fade into obscurity.

Eddie Bravo’s Secret Tournaments are Becoming the Stuff of Legends

5 Best Tips To Avoid Bad BJJ Gyms If You Are...