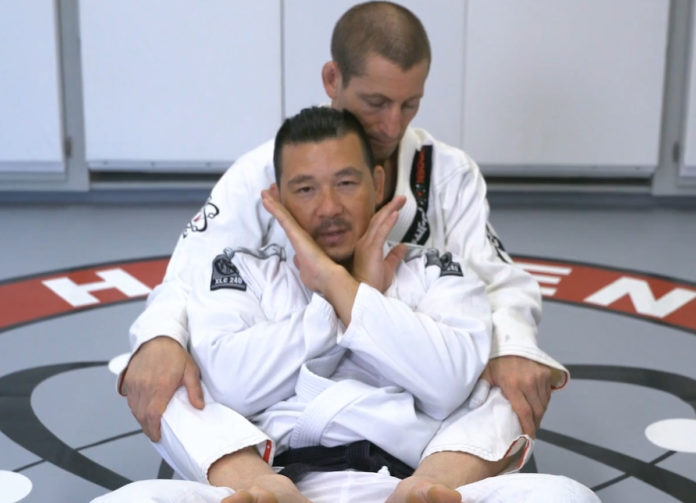 Having someone on your back is arguably one of the worst positions in BJJ. You are very vulnerable to chokes and you cannot even see your opponent. Furthermore, unlike attacks from other positions, your opponent does not need to sacrifice much control to launch incredibly effective submission attempts. Nevertheless, with Henry Akin’s Cross Grip Defense against back control, you can stifle your opponent’s choke attempts and begin working your escape.

In this article, we break down the basic cross grip defense from Henry Akin’s Hidden Jiu Jitsu system. By the time you are finished, you will be well on your way to impenetrable back defense.

The Threats from Back Control

Back control offers the attacking player many different options for submissions. As the “bottom player,” you are open for both chokes and armbars. As such, establishing a defensive posture and thwarting submission attempts is crucial before attempting your own escapes.

The biggest priority is not allowing your opponent to wrap up your neck or establish a collar grip. Additionally, preventing your opponent from controlling and isolating an arm is another top priority.

To stop these attacks, Akin’s relies on the cross grip defense. The overall sequence begins with you sitting back ‘comfortably’ against your opponent. With open palms, you will cross your arms in front of your chest just below your chin. They should roughly be crossed about two-thirds of the way up your arm from your elbow.

From here, pinch your elbows against your sides to prevent your opponent weaving under your arm and establishing wrist control.

From here, the primary defense relies on using your open palms blocking the opposite side as the arm. For example, the left hand defends the right side of your neck. It is vital that you keep your palms facing outward. The goal is not to grip your own collars, but rather, grip your opponent’s hands when they attempt to pummel for a choke. This will force your opponent to pull their hands backward, resetting the position.

To drill the cross-grip defense, start with your opponent on your back. To begin, establish your crossed arm position in front of your chin and neck. From here, your opponent will try to pummel and hand fight to get a choking grip on the far collar.

Your goal as the defender is to prevent your opponent from establishing a grip. If you manage to grab one of their hands, for the purposes of the drill you are going to let go. This allows more overall reps and time spent defending. In a live match, you might hang on longer to your opponent’s hand to set up a full escape.

The same reset applies if your opponent manages to get a collar grip. Simply reset to continue getting repetitions.

The Cross Grip Defense in Context

While preventing a choke or further control is a top priority when someone has your back, the overall goal is not just to defend the choke, but to escape the position. To achieve this, you will have to continue the escape sequence using your legs.

To get access to Henry Akin’s full back control escape series, visit the Hidden Jiu Jitsu back control system course.

Until then, practice your cross grip until it is second nature, and you will be well on your way to being impossible to submit from the back. 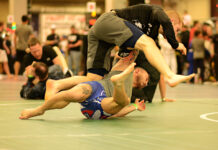 Am I Crazy Or Are Purple Belts Today as Good as...

Two Dumbells and 15 Minutes is All You Need

Cris Cyborg Calls Out FloGrappling on Twitter: “I will no longer...