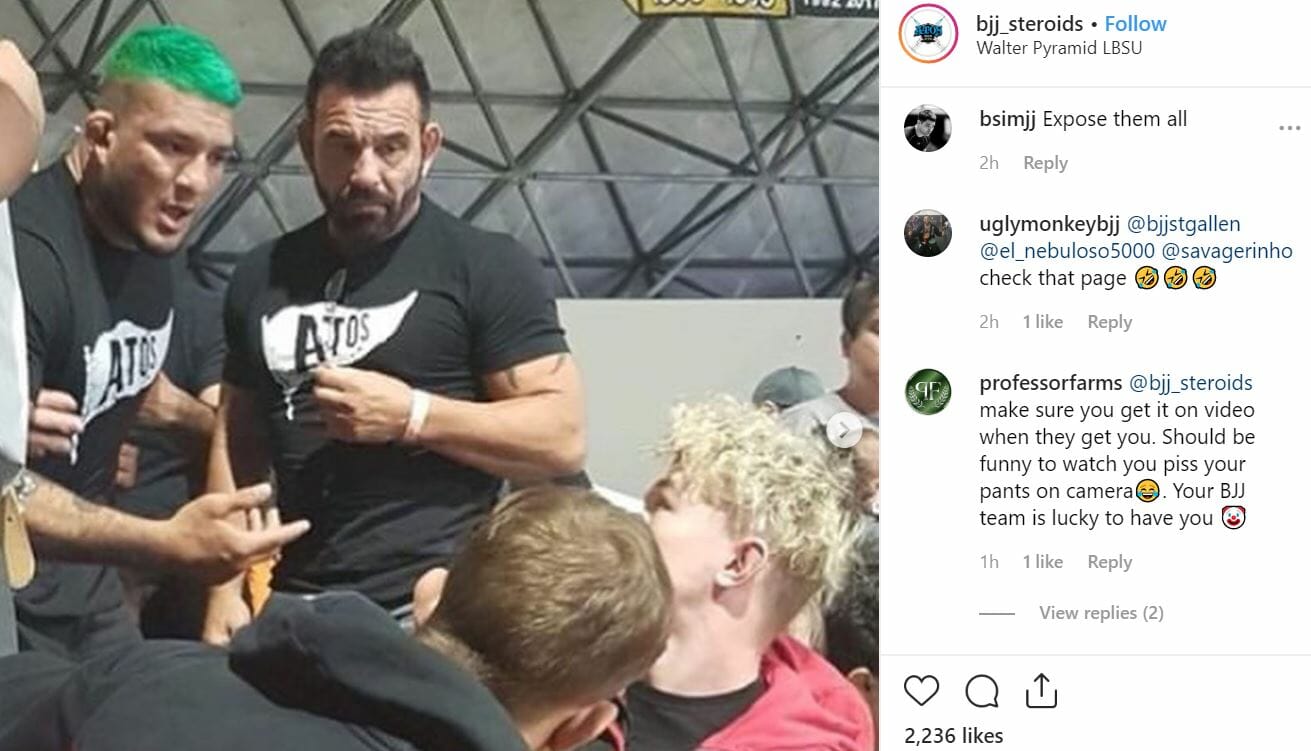 UPDATE: In the original article, we mistakenly reported that Galvao had previously tested positive for PEDs. This was not true. Galvao has been tested and passed PED tests in IBJJF competitions in the past. We have updated the story and apologize to Andre Galvao and Team Atos.

UPDATE: The BJJ_Steroids account was taken down Wednesday morning.

And now, a story you won’t find any mention of on FloGrappling, IBJJF, or the Jiu-Jitsu Times. Is it newsworthy? That’s debatable. Is it news? Absolutely.

I’m talking about the most wanted wanted man (woman?) in BJJ right now, particularly if you’re a member of Team Atos. It’s whomever is behind the new account “BJJ_Steroids”, which went from fairly obscure to over 7,000 followers in just a few days.

While most of us were watching the IBJJF Worlds and celebrating how awesome high level jiu-jitsu is, BJJ_Steroids managed to insert himself into the Instagram conversation with a combination of damning allegations, inflammatory language, and good ol’ fashion live video. The culmination of which prompted a full on manhunt in the Los Angeles arena from certain members of Team Atos. All of which we watched play out on Instagram hour by hour.

BJJ_Steroids was created a few months ago, an account dedicated to accusing popular BJJ athletes of steroid use. Some of these are competitors who have tested positive for PEDs in the past. Others have not, but were accused by the channel of cheating, without any real evidence, it should be said.

The account focuses almost exclusively on Team Atos and Art of Jiu-Jitsu (AOJ), with particular malice towards Andre Galvao. In fact, an altered Team Atos Logo is the account’s profile picture.

And until last weekend, it was just another troll account.

With a modest following of a few thousand, BJJ_Steroids made the leap from keyboard warrior to undercover reporter as he was seemingly physically at the Los Angeles Walter Pyramid Arena. A series of posts using the IG “stories” feature showed him recording on his phone within a few feet of athletes like Andre Galvao and the Mendes brothers. These post were accompanied by snarky captions.

Then it got really crazy.

BJJ_Steroids internet antics were being watched in real time by many in the same arena, and a real sense of anger began to simmer up amongst many of the Atos camp. BJJ_Steroids seemed to revel in the attention, posting screenshots of threatening messages (and others of support) he had been receiving throughout the day.

On Saturday evening, BJJ_Steroids began to openly taunt team Atos by posting long stories, seemingly revealed his location in the arena. The next day, Atos took the bait and began what can only be described as a manhunt to find anyone with a cell phone who looked suspicious.

Information is a little unclear, but according to photos taken by (or merely posted by) BJJ_Steroids, members of Team Atos confronted a few individuals at the arena whom they believed to be the man behind the infamous account. This may have included taking their cell phones and checking their Instagram accounts.

BJJ_Steroids managed to capture images of these acts, which seemed to infuriate his targets even more. It all culminated during the women’s finals matches, in which more than one altercation unfolded in the stands. Sadly, this seemed to be a major distraction for the crowd, but hopefully not the athletes.

By “altercation” we don’t exactly know if that included physical touching or fighting. Many of the videos shared on IG simply show commotions in the stands.

As of the writing of this article BJJ_Steroids has skyrocketed from 7,000 to over 13,000 followers. A reddit thread discussing him, and steroid use in high level BJJ generally, is trending on reddit. We contacted him asking for a comment on this article, but he did not respond yet. We will update it if he does.

Looking for a clean supplement? CBD is becoming the go to training aide for clean athletes. Check out our breakdown here.