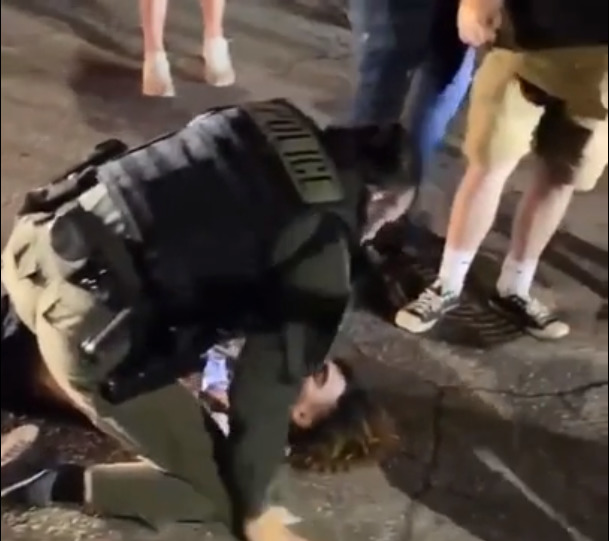 In a recent video that surfaced on Reddit, an Atlanta cop uses BJJ to safely break up a bar fight.  Ultimately, the cop sweeps and controls one of the perpetrators and stopping the altercation without any physical harm to anyone involved.

Based on the video circulating on social media, a fight breaks out in downtown Atlanta outside of a bar.

The video begins showing perpetrator #1 over a sitting-down perpetrator #2, throwing strikes in what can only be described as a sloppy MMA style ground and pound attack.

Although the build-up to the altercation is not shown, it appears to be mutual combat.

A nearby cop uses BJJ and quickly pulls perp #1 off and drags him to the ground via a rear body lock.

During the ensuing scramble, the perpetrator turns into the cop, who quickly begins establishing a guard.

As the exchange continues, the cop appears to hip-out to enter the dog fight position with a headlock.

The perpetrator drives into the cop, who rolls over in a modified ‘plan B sweep,’ ultimately coming to a top mount position.

We do not know whether charges were ultimately filed. Although both perpetrators could likely be charged, it does not appear from the video that either was arrested.

Regardless of the legal outcome, this video is an excellent example of how basic BJJ can be used to safely end what could have easily escalated to a deadly force scenario.

Takeaways: cops should do BJJ

The officer involved in the incident clearly had grappling experience and handled the situation professionally and effectively.

Videos like this demonstrate the necessity of grappling training for law enforcement when it comes to de-escalating and safely ending altercations.

While we do not condone bar fights to any degree, given that these incidences are likely to occur alongside mass alcohol consumption, it is vital that law enforcement have the physical training needed to end these situations safely.

For a full Gracie breakdown, check out the following video.

If you need more examples of great BJJ being used in self-defense, check out our article on women using BJJ to defend themselves.

It’s a Small World: Training with Someone You Work With