Home BJJ Techniques Boxing for BJJ: Why You Should Cross-Train the Sweet Science 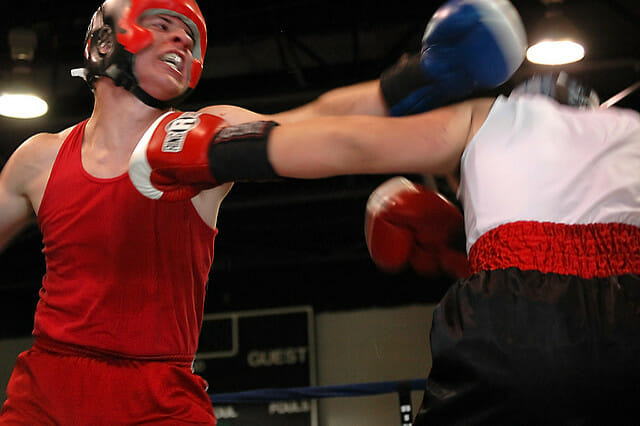 From fisticuffs to Floyd Mayweather, there is no denying that boxing has deep roots in martial arts culture.  Seen in both “gentleman’s duels” and working class bare-knuckle pub fights, boxing is the classic art of fighting with fists. Boxing for BJJ can be a great cross-training art to supplement grappling with striking skills.

The primary goal in boxing is to cause more blunt force trauma to your opponent than he can to you in a given time period.  The height of a boxing victory involves knocking your opponent out with a firm punch to the head, or dropping him with a wholloping blow to the liver.

Why Choose Boxing for BJJ?

With the popularity of MMA growing by the day, many BJJ players are becoming interested in cross-training in striking but do not consider boxing for BJJ a good option.  The main reason is that boxing is fundamentally an incomplete art. Traditionally, only stikes with the fist or hand are legal in boxing. Additionally, fighters are usually separated if they end up clinched, removing any grappling possibility in a boxing match.  Furthermore, strikes must occur above the waist, and as is the case with most combat sports, attacks to the eyes and specific targeting of the throat are illegal.

I believe that this discounting of boxing for BJJ is a disservice to any martial artist looking to round out.  Boxing has its flaws, but here are three reasons you should train it anyway.

Number One – Simplicity and effectiveness of the striking techniques

Unlike the flashier athletic strikes in arts such as Muay Thai or Karate, it is possible to learn to throw a solid two to three punch combo in about six months with consistent practice.  Realistically under any ruleset, a large majority of knockouts are due to the back-hand straight or overhand punch, the main cannon of your typical boxer. Keep in mind, landing these punches on an experienced striker is no small task.

Here is a classic knockout compilation from Butterbean under a boxing ruleset. While he is far from the most technical boxer, Butterbean is a good example of the simplicity and effectiveness of basic boxing punches. Most of his knockouts are from the same punch – a mean overhand right (1:20 for a good highlight).

In the next video, we see experienced karateka going at it in a pretty open ruleset. Notice that a good number of the significant strikes are jabs, crosses, and hooks. All are staples of a boxing arsenal. Bonus: Bas Rutten narrates the fight.

In this “street” video, we see a bouncer knock out a guy with a sloppy right hand (1:20)

As we can see from 3 videos under 3 different rulesets, the effectiveness of basic boxing strikes is undeniable.

However, the strikes are nothing without proper footwork.

Number Two – The Focus on Footwork and Positioning

Any good boxer with a long career knows that the key in boxing isn’t power or speed, it is positioning.

Chances are if you walk into a boxing gym, you are going to hear them hounding their fighters about footwork.  You may see them running agility ladder or “in and out” drills for 20+ minutes a practice.

But what is footwork really?

Footwork in boxing is the art of putting yourself in a position to punch your opponent where he must “square up” and regain stance before returning fire.  It is in this gap of one fighter being out of position where the majority of high-level knockouts occur.

Far from being confined to sport, good boxing footwork teaches you the foundations of any unarmed striking encounter:

The following is a classic video of a Turkish boxer using footwork to deal with what appears to be an onslaught of rabid attackers.  Notice how he circles out initially to ensure the attackers remain in front of him. He then defensively retreats, which is okay given the open space.  Notice that his balance and footwork allow him to continue to counter the attackers with strikes, even as he keeps distance by retreating.

Okay, so you’ve seen that the fundamentals of boxing work in a variety of combat scenarios.  However there is a final reason that boxing is a solid choice for BJJ players: It has a long history as a competitive Olympic and professional sport,. What this means is that you are far more likely to find a qualified boxing instructor in any given American city than you are a qualified MMA or Muay Thai instructor (at this point in martial arts).  Trust me, proper boxing instruction beats mediocre instruction in a “complete” art every time.

What to look for in a boxing gym?

The first consideration is the qualification of the instructor.  What is his professional experience both coaching and competing? How good are his best guys? How good are his worst guys? And how long have any of them been training relative to their boxing skills?

In terms of class dynamics, avoid group classes where you are paired with another beginner and given a random combo to hold mitts for one another.  A proper boxing class includes footwork drills where the instructor actually teaches how the drills apply to the fight.  Even if you aren’t sparring yet, drilling should include “live drills” where you have a mouthpiece in and you are throwing light combos at your partner, gloves on.  Furthermore, try to avoid hard sparring until you have a decent defense, otherwise, you are liable for unnecessary brain damage and aren’t really learning what you need to stay safe.

Overall, boxing for BJJ is a great choice for a grappler looking to round out their martial arts skills.