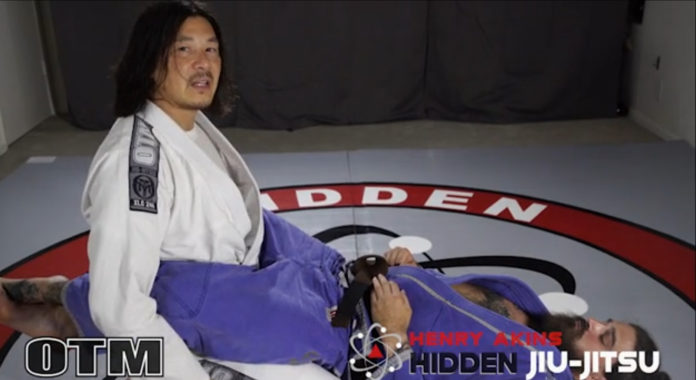 You’ve undoubtedly heard your coach railing about the importance of posture. Particularly when you end up in an opponent’s closed guard, maintaining good posture is vital to avoid the most common closed guard attacks.

In his closed guard seminar, BJJ black belt Henry Akin’s breaks down the most important aspects of having unbreakable posture when in your opponent’s closed guard. The following article breaks down these tips and gives you a sneak peek at the depth of Akin’s mastery.

Typically, when people think of good posture, they envision standing or sitting up straight, no slouch in the shoulders or rounding in the back, and a neutral head position. While this is a generally accurate description of posture, in BJJ, the devil is truly in the details.

Posture in closed guard has less to do with being tall and proud, and more to do with stopping your opponent from breaking you down, controlling your head, and sweeping or submitting you. While there are similarities between generic posture and proper closed guard posture, the goal is not to blend in with polite society or look confident, it is to avoid having your opponent impose their guard game on you.

As mentioned, posture in BJJ is like posture in regular life. However, there are a few notable differences.

In BJJ, you are resisting a horizontal and vertical force when your opponent attempts to pull you down.

As such, sitting back on your heels, tucking your pelvis by engaging your glutes, and contracting your abs to slightly round your spine is more effective than traditional posture with the natural arch in your lower back and head held high.

Tucking your chin and pulling your head ‘backward’ also reduces the leverage your opponent has when pulling on your head.

Overall, this braced position with a tucked pelvis creates a strong arch in the opposite direction as your opponent’s force, giving you much better ability to resisting your opponent’s posture breaking attempts.

When you have a straight posture with the natural low-back arch and head held high, your opponent has more leverage to pull you down.

Think about a ratchet socket wrench.

A long, straight handle allows you as the worker to exert tremendous force on the bolt you are securing.

A shorter handle that curves in the direction you are exerting would be far more difficult to ‘crank on’ and would drastically limit the torque on the bolt.

In this example, your spine, back, and neck are the handle of the ratchet, and your opponent is the worker trying to crank you down like a lag bolt.

The difference is that you can actively change the length and curvature of the handle.

Tucking your pelvis, squeezing your abs to slightly bring your ribs to your pelvis, and tucking your chin creates the curve that robs your opponent of the leverage needed to break you down.

Akins calls this the ‘S’-curve versus the ‘J’-curve. The ‘S’ curve is the natural ‘good posture’ you are probably used to. While you might make your momma proud with this tall position, it basically hands your opponent a long-handled ratchet to break you.

The ‘J’-curve is the braced arch that robs your opponent of the leverage they need to pull you down.

While these basic posture tips will immediately improve your skill as top player in closed guard, things are rarely so simple in BJJ.

Your opponent has many different options for breaking you down.

The good news is, in the ‘Inside the Closed Guard’ Instructional, Akins teaches you how to deal with every single posture-breaking attack your opponent can try. These include escaping the guillotine, triangle, and other common closed guard submissions.

With over 28 detail-laden technique breakdowns, Akins ‘Inside the Closed Guard’ is a must-have for developing unbreakable posture.

Your training partners and opponent’s alike will quickly tire themselves with their feeble attempts to break you down.

By the time you pass their guard, they will be ready to tap from frustration before you even attempt your own submission!