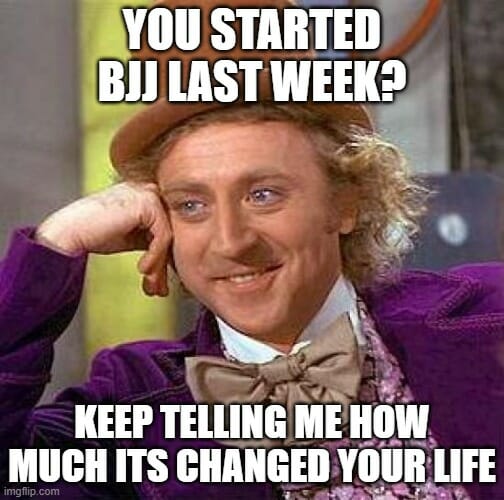 If you’ve spent any time on the mats, you’ve probably noticed many hilarious aspects of training Brazilian Jiu Jitsu.  We’ve compiled (#) of the most hilarious BJJ memes on the internet to keep you entertained throughout the grind.

Brazilian Jiu Jitsu is not all fun and games.  I think we can both agree that getting good at BJJ takes an insane amount of work and dedication.

However, it’s always important to enjoy the ride.  At the end of the day, if you put on pajamas and rolling around on the ground for several hours, you can’t take yourself too seriously.

If you are like us, these BJJ memes will make you laugh at yourself harder than anyone else (who doesn’t do BJJ) ever could.

Wolf of Wall Street Takes Your Back

This BJJ meme eloquently depicts the sheer joy of being saved by the bell during live rolls.  Now you can walk away telling yourself you would have escaped.

Will Ferrell Does No Gi BJJ Meme 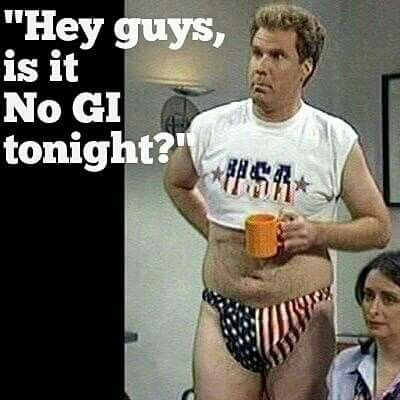 Don’t be the guy who wears underwear for no gi… you know they make shorts and spats for a reason… right? 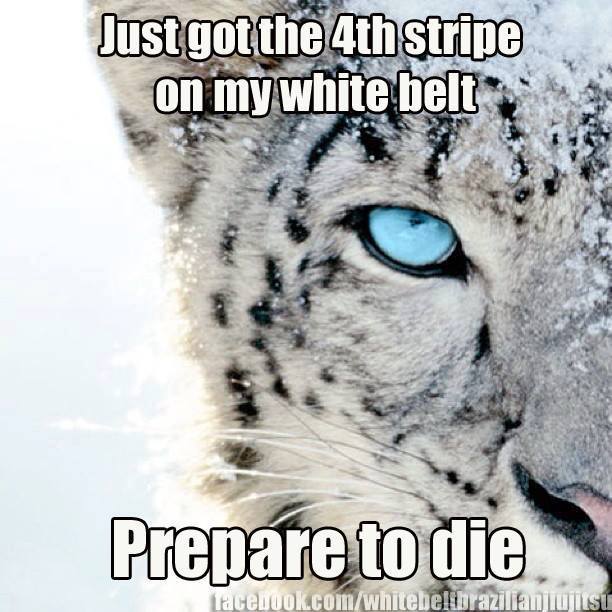 I think we can all agree there’s nothing more annoying than a four stripe belt getting cocky. 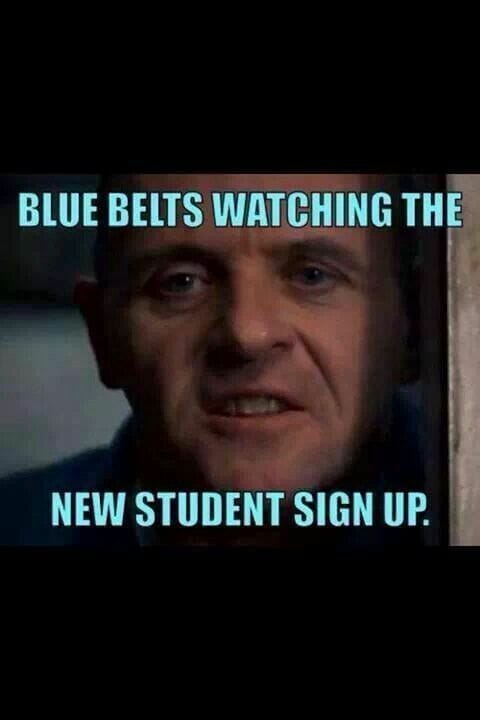 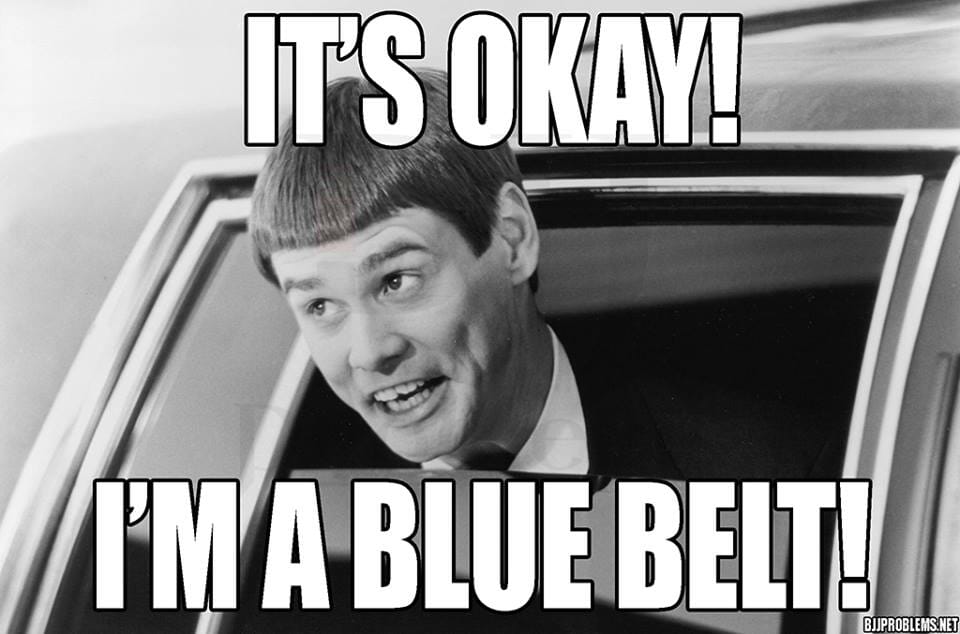 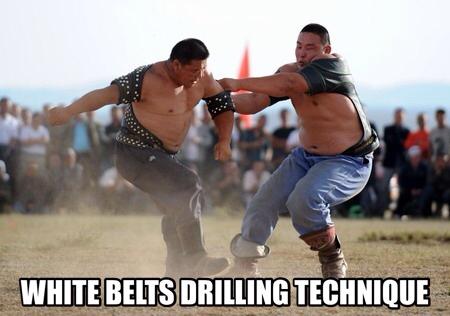 One of the biggest things you’ll have to learn at white belt is how to properly drill.  This BJJ meme perfectly captures the issue with drilling with white belts. 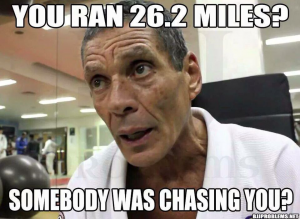 Like most of us BJJ players… you probably hate running.  This Relson Gracie meme perfectly sums up our feelings about running. 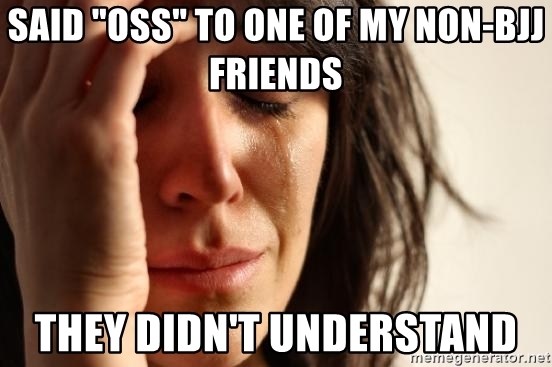 As we discussed in our ‘Oss’ article… you probably should just stop saying Oss altogether.  If you happen to say Oss to one of your non-BJJ friends… God help you my friend. 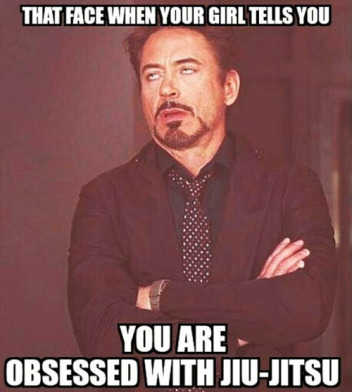 It can be hard not to talk about BJJ constantly once you are hooked.  Your friends and family are probably sick of it.  The thing is… people who don’t do BJJ just don’t get it…

Roll for Awhile Longer First… Then Talk About the BJJ Life…

There’s no one more zealous than the newly converted.  This sarcastic Willy Wonka BJJ meme perfectly captures my feelings when I hear some new guy talk about how deep BJJ changes lives.  It probably annoys me so much because… well… that was me after 2 weeks of BJJ.

Aww Thanks… Am I Really Getting Better? 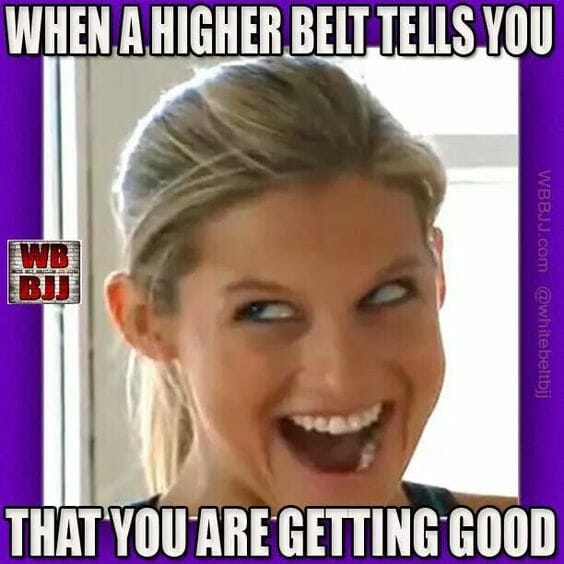 Sometimes the only way to measure progress is whether we are 1% more annoying for upper belts to submit.  Please… tell me I’m getting better! 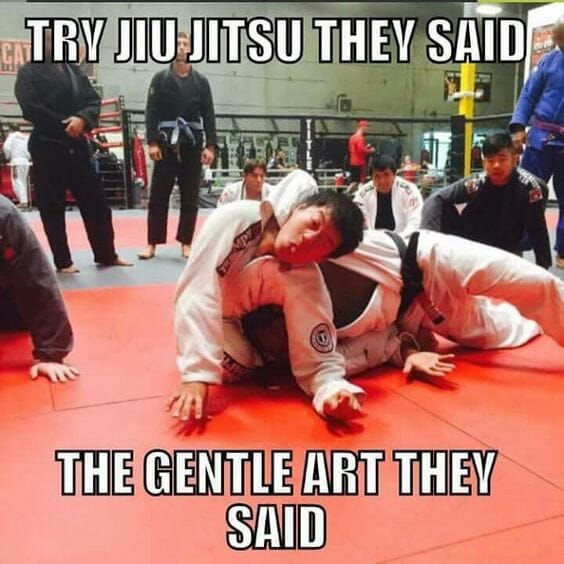 Calling BJJ a ‘gentle art’ is a meme unto itself.  While it’s certainly more gentle than other fighting methods… I think it’s safe to say ‘gentle’ is a relative term.

Hopefully these BJJ memes made you laugh as much as we did.  Whether you are back to training or still suck in lockdown, never forget to sit back and chuckle at the absurdity that is training BJJ.  Sometimes, you just gotta stop being so serious for a second…