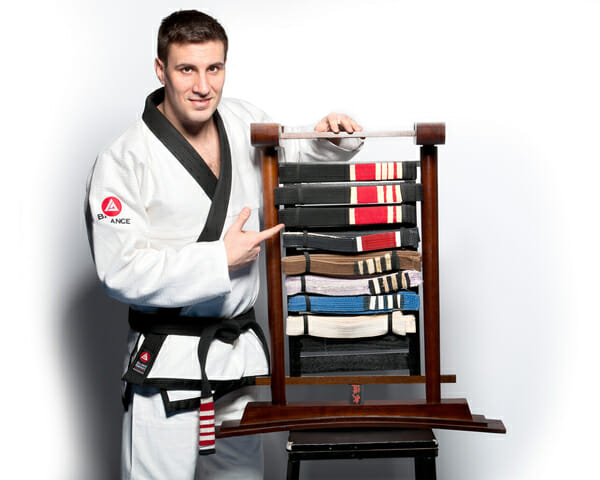 The BJJ Belt System: How Long to BJJ Black Belt?

The Brazilian Jiu-Jitsu belt system has a reputation for being a long and arduous process to rank up.  While the best martial arts don’t hand out belts like candy, the BJJ belt system is exceptional for the amount of time it takes to get to each rank.  Furthermore, the BJJ black belt rank takes serious dedication to earn above and beyond many other martial arts.

We’ve broken down the BJJ belt system and estimated the length of time to receive each belt.  We talk about stripes in BJJ as well as what it takes to receive the BJJ red belt.  We’ll finish by discussing some of the reasons why a BJJ black belt can take so long to earn.

For this article, we will only go over the adult BJJ belt system, as the kids’ ranking system gets a bit more complicated.

Every adult beginning BJJ starts at a white belt regardless of previous grappling experience.  The overall belt order is as follows:

White to Blue: The First Rank

White belt to blue belt is the first major milestone in BJJ.  Realistically, most of your time at white belt should be spent learning defenses and escapes.  You will of course begin experimenting with submissions as well.  However, you probably won’t be tapping out anyone other than fellow white belts.

Given the lack of experience, athletic ability and other grappling experience plays a huge role in your perceived toughness at white belt.  The lack of technique means that you will probably end up using a lot of strength when rolling.  This is normal, but it is a habit that you will need to break.

Once you have a firm grasp of escaping and an overall understanding of BJJ fundamentals, you will be close to getting your blue belt.  It typically takes around 1-2 years to receive a blue belt, but this can vary substantially.  People with experience in wrestling and judo often rank up quicker.  Furthermore, the more you train and the more you focus, the quicker you will rank up.

Depending on your school, you may be required or encouraged to compete before receiving your blue belt.

For a world-class instructional on the skills needed to go from white belt to blue belt – check out Henry Akins White-to-Blue fundamentals curriculum.

Blue to Purple: The Eliminator 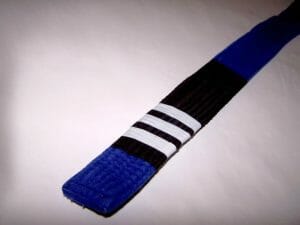 Blue belt to purple belt is one of the more difficult transitions in BJJ.  There is a cliché that people often quit at blue belt, and for good reason.  As a white belt, there really is no expectation.  You know you suck, and so does everyone else.  Purple, brown, and black belts are not typically going to go hard on you every time you roll.

Unfortunately, once you are a blue belt, things change.  Typical purple belts will turn the heat up.  White belts will want to beat you to earn their own blue belt.  Finally, when you roll with black belts and brown belts, you realize you still suck.

At blue belt, you have enough understanding of BJJ to know how bad you are at Jiu jitsu.  The adage holds true: a novice simply doesn’t know what they don’t know.

The tricks you spent over a year developing at white belt still don’t work on good players.  If anything, you might be getting tapped faster by upper belts because you actually go for specific moves – moves that upper belts can counter more easily than someone who just clams up and doesn’t attempt anything.

Nevertheless, if you stick to the grind, you will begin honing your own personal style of BJJ.  The knowledge gap between blue and purple is vast, but you will get there eventually.  At the high end of blue belt, you will start having moves you are personally good at.  You’ll begin giving purples a run for their money and forcing browns and blacks to pull out a few more tricks to bring you down.

Speaking as a purple belt, I spent over three times as long at blue belt then I did at white belt.  The average purple belt takes anywhere from 3-6 years to achieve, depending on multiple factors.  The IBJJF standards require two years at blue belt to receive a purple belt – however instructors may or may not follow this guideline.

Purple to Brown: Express You Style

Once you are a purple belt, you’ve developed your own style of BJJ that works well for your body.  While you will certainly have an arsenal of techniques you know, there are probably a handful of techniques you know well enough to really use against skilled opponents.  A purple belt should be at the point where brown and even black belts must watch their backs or risk losing position or getting submitted.

At purple belt, you really begin honing your own game and learning how to apply it against higher-level opponents.  Assuming you are training consistently, you will theoretically spend less time at purple belt than you did at blue belt.  The IBJJF standard calls for 1.5 years at purple belt before being eligible for promotion to brown belt.  As with blue to purple, instructors will ultimately have a bit of discretion.

Brown to Black: The Final Touches

Believe it or not, BJJ brown belt to black belt may require the least amount of time of all the belts.  A brown belt is a seriously advanced rank in BJJ.  At this point, you have a polished game and an arsenal of techniques.  You will begin hammering out your details to allow you to threaten black belts with submissions.  Additionally, you may be teaching or even leading a BJJ program.

At brown belt, you have nearly all the knowledge you’ll need to be a black belt.  You’ll probably be known for certain techniques.  The final stretch requires sharpening those techniques until they are crisp enough to use against anyone.  The IBJJF guidelines require 1 year at brown belt before being eligible for BJJ black belt.

Belt stripes are small pieces of tape that are applied to the end of a belt.  Realistically, belt stripes don’t really mean that much until you have a black belt.  Before black belt, stripes on a belt are given by some instructors at their discretion.  Some instructors don’t do stripes before black belt.  Other instructors feel that stripes are a good way to honor commitment in between full ranks.  For most people, they are simply an indication of how long someone has been at their current belt level.

At the black belt level, stripes are referred to as degrees and are more formal.  Typically, each degree at black belt requires three years.  As such, a stripe on a blackbelt represents more time training since receiving the black belt than the time it took to receive an entire colored belt rank (i.e. blue to purple).

What about the Coral and Red Belts?

The coral belt and red belt in BJJ are both rarities.

According to the IBJJF a coral belt is a 7th or 8th degree black belt and typically involves having a serious impact on the history of the art itself.  These ranks require a commitment to both competing and teaching BJJ at the black belt level and are exceedingly rare.

The red belt is the ultimate rank in BJJ.  According to Renzo and Royler Gracie, the red belt is reserved for those “whose influence and fame takes them to the pinnacle of art.”  It is awarded in lieu of a 9th or 10th degree black belt and comes with the title “Grandmaster.”

It takes an estimated 48 years at black belt to receive a red belt.  A theoretical black belt earned at 19 (the minimum age to receive a black belt) would be eligible for red belt at age 67.

If you add together the average time at each belt, you will end up with around 6-8 years to go from white belt to black belt.  With that said, achieving a BJJ black belt in six years is uncommon.  Most of the BJJ black belts I have talked with took anywhere from 8-13 years.

There are many reasons that a black belt typically takes upwards of 10 years to receive in BJJ despite the theoretical average being 6-8 years.  These include the following factors:

#1 – The Depth of Knowledge in BJJ

Due to the vast number of techniques and styles of BJJ, there are so many positions and skills you must master before becoming a black belt.  These skills take thousands of repetitions before you build the muscle memory to perfectly apply them at 100% intensity against other black belts.

Injuries are an often-overlooked element of why getting a BJJ black belt takes so long.  Depending on how often you compete, how hard you train, and your luck, injuries can drastically alter the amount of time you spend at each belt.

The dichotomy of injuries is that the harder you train and the more you compete, the more likely you are to get injured.  On the flip side, athletes who train and compete more often tend to rank up faster with all things considered.

Certain injuries can take weeks to months or longer to heal and add a huge element of randomization to how long the journey to black belt takes.

#3 – Life Events on the Road to BJJ Black Belt

It’s easy to sit back in a chair and speculate on how much time you need to spend at a certain belt.  We often assume that training 3-4 days a week is feasible indefinitely.  The fact is that over an extended time, there are so many possible curve balls that life can throw at you.  These range from having kids, getting new jobs, being forced to move, or simply losing interest in BJJ.

Over a period of months, planning 3-4 days per week of training is doable.  However, when you begin expanding that time frame over the years it takes to rank up, the chances of having life keep you off the mats go through the roof.

If you start as a single guy or girl in your twenties, you can probably train quite a bit assuming you commit.  However, you may eventually want kids or a serious career.  Both will require a commitment that can keep you from training.

There is a big opportunity cost to spending even 3 evenings a week at the dojo.  The longer you extend your timeline, the greater the cost.  Furthermore, the older you get, the more responsibilities you have.  These responsibilities inevitably impact the time you can spend training BJJ.

Ultimately, getting to black belt requires a massive commitment to BJJ over a long period of time.  The journey to black belt is not linear.  People who get to black belt have sacrificed a lot to dedicate themselves to BJJ.  You must have a deep love for the art itself.  Training simply for the goal of getting a belt is unlikely to keep you committed enough to receive your BJJ black belt.

Final note: Do not forget to wash your belt after training BJJ!