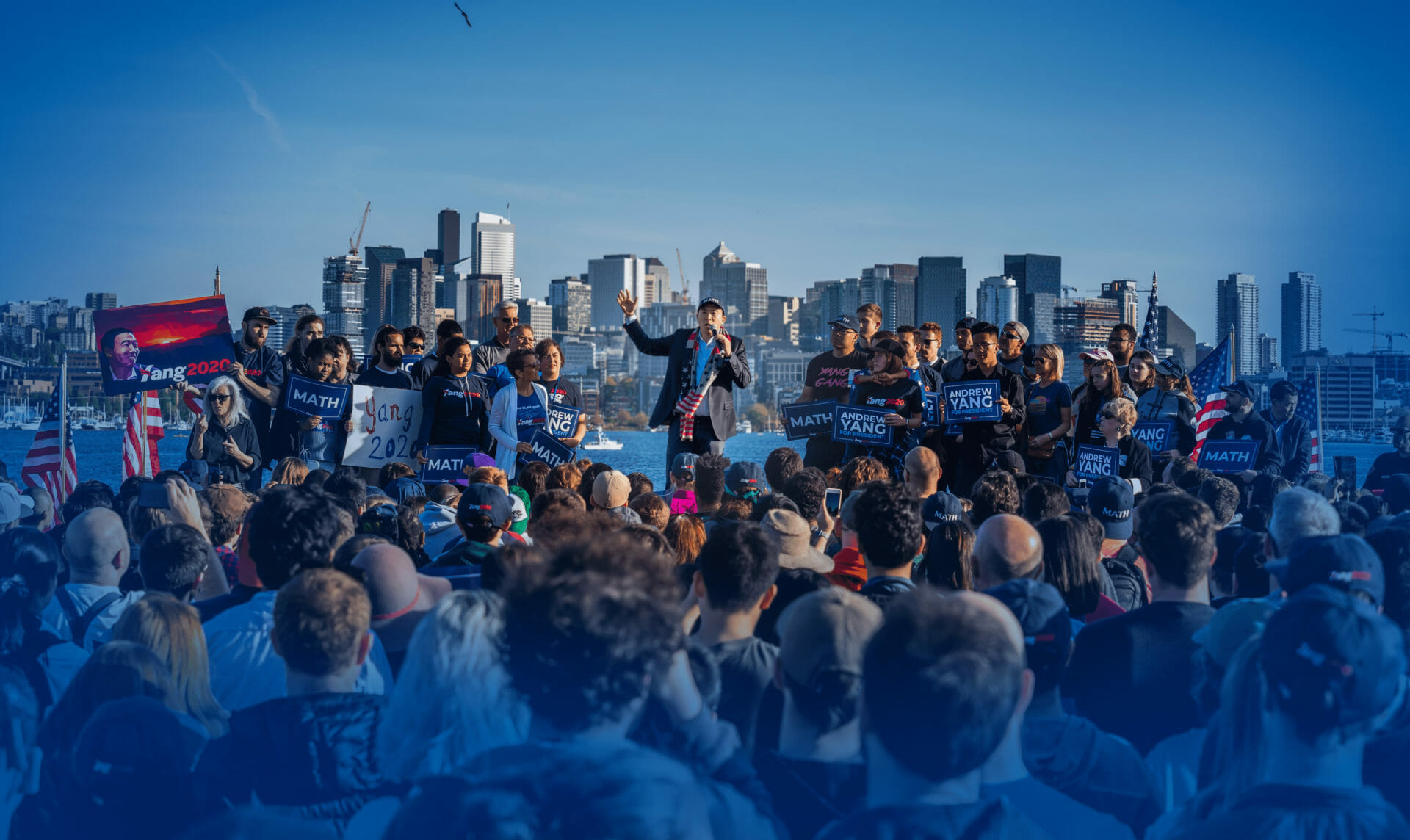 EDITORS NOTE: We are not affiliated in any way with the Yang campaign.

Why MMA Fans Should Know About Andrew Yang

If you watched the Democratic Debates last week. You’d be forgiven for barely noticing the Asian man without a tie, standing close to Joe Biden. But if you’re a supporter of MMA, or even just jiu-jitsu, you should know a thing or two about him.

His name is Andrew Yang, and despite having the shortest airtime last week, he has a massive online following that has gone largely ignored by mainstream press. To date he is out-pollng and even out-raising all but the top tier candidates, primarily from small contributors giving less than $200.

Basically, he’s the Bernie Sanders of today. He has a long list of policy ideas, many of them seem both bonkers or genius depending on who you ask. But there is one thing that he has raised time and again.

He wants to finally be the one to unionize MMA fighters. And it wasn’t an off handed remark. Yang has even outlined the policy on his website.

Over the years, MMA unions (or associations, although they are technically not the same thing) have existed, albeit with small rosters. None of them have proven to have any real power.

Ultimately, the MMAAA’s infrastructure turned out to be paper-thin. Its run as a union barely extended past that first press conference.

But Andrew Yang may have the solution to this problem (that is, if you see it as a problem).

MMA fighters will vocally decry the fact they are technically independent contractors for organizations like the UFC or Bellator. That means that many key rights afforded to employees such as health care, retirement, workers comp, and unemployment, can be sidestepped.

Large organizations, such as the UFC, provide some of these services anyways, but their distribution is often uneven. Major fighters such as Chuck Liddell are “taken care of” after retirement, but ones that fall out of favor are discarded.

There’s also the fact that MMA fighters are explicitly not allowed to fight for other promotions when they are under contract (a clause they agree to in most contracts). This has lead to some notable cases of fighters being held hostage by promoters; not being offered fights but not able to sign with other organizations. The ability to seek work from multiple employers is a key factor for what defines an independent contractor. And fighters can’t do that until their contract is up, which often last for years.

The end result of this? Every athlete is on their own during negotiation, obligated to hire managers and/or attorneys. For 99% of professional fighters, this means they have little to no leverage during contract negotiations.

No One Represents the Fighters as a Whole

More importantly, it also means that when major organizations like the UFC make decisions that affect ALL their fighters, their is no one that speaks for the fighters as a whole. A very real example is the much maligned uniform policy of the UFC, which stripped the fighters of their ability to advertise products in the cage (via their fight shorts and banners.)

Many fighters made more from these apparel deals than from the UFC itself. It not only cost fighters hundreds of thousands of dollars, but was a serious blow to the MMA apparel industry, whom suddenly lost their biggest platform for advertising.

Andrew Yang is proposing that the National Labor Relations Board treat MMA fighters as athletes and employees as opposed to independent contractors. While this wouldn’t automatically create a union, it would remove a major barrier to unionization.

Yang was recently quoted during an interview as saying,

“Mixed martial artists are among the most highly trained athletes in a dangerous sport, and the UFC is a multi-billion dollar business with a broadcast partnership with ESPN. Meanwhile, fighters are left fighting for pennies on the dollar–they receive only 10-15% of revenues versus 50% with other sports–and they live by arbitrary rankings and are fired if they breathe the word ‘union.’ We should apply the Ali Act to MMA and enable fighters to organize and unionize. It will be good for the sport long-term by attracting higher-level athletes and giving the fighters more opportunities to train for more sustainable careers. If you’re going to be a major league sport, you need to act like it.”

The “other sports” Yang hinted at was likely the NBA, which plays players roughly half of their revenue. And it took the real threat of a player walkout (or NBA lockout) to get to that arrangement.

It’s inevitable there would be unintended consequences of fighters unionizing. It would hit regional MMA promotions the hardest, who already operation on tight budgets. In fact, it would probably restructure the MMA economy completely. But generally, everyone agrees it would be good for the athletes, whom are among the lowest paid in any professional sport.

The real question is, could Yang do it if he won the election (which is still a big “if”)? If such action had to go through congress, you can bet organizations such as WME (the owners of the UFC) would work hard to lobby congress against it. In fact, MMA managers would also be largely against it also.

It also raises the suddenly-not-so-crazy question of whether other combat sports, such as Brazilian Jiu-jiutsu, could be next.