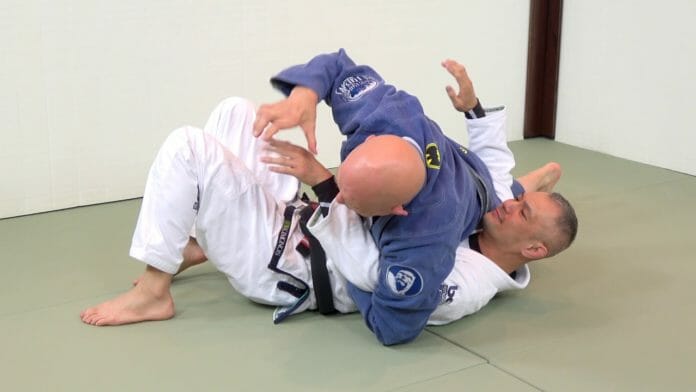 Distraction and misdirection are underrated concepts in BJJ. But if you go back and watch the old Gracie In Action videos, you’ll see that guile has always been a part of the game. The Gracies were big on feigning front kicks to set up takedowns, or slaps to the face to bait someone’s arms out.

You’re probably not training at a gym that allows for either, but don’t think you can’t keep a few tricks up your sleeve when your hunting for a submission. Distracting opponents is an essential tactic that high level black belts use all the time.

Most of the time, you threaten multiple submissions at once. But other times, you simply create annoyances that will prompt your opponent to lose focus or make a bad decision. Here’s a couple to get you started.

Put Stuff in Their Face

If you’re past an opponent’s guard in any way, you’ll have some sort of access to their face.

People don’t like things in their face, period. It triggers a sense of claustrophobia. Often we will take steps to get rid of these annoyances, even if there is no serious threat of a submission.

So if a hand isn’t doing anything, plant it square on an opponent’s chin, neck, or face. Throw that “shoulder of justice” on their chins. Use that gi sleeve to cover their mouths or eyes. Throw that forearm across their neck. Be persistent and annoying. These tactics are especially useful from the mount or the back. When your opponents go to defend their faces, you can finally get that collar grip or that high mount you wanted all along.

Squeeze with Your Legs

If you’re in full guard or have the back, put those legs to work and squeeze to apply pressure. Will it tap anyone out? Probably not. But that’s not the point.

You lose nothing by applying constant pressure with your legs. You opponents may play it off, but it’s just one more thing they have to put up with in your guard or back control. It could sap some extra cardio out of them, or they could overreact and try and force an escape.

From every position there are a handful or attacks that have very low risk to you. You should be constantly threatening with them. Collar chokes are a staple here. If you’re hands are doing something else, they should be grabbing lapels.

I should clarify that when I say “fake” I still mean that your attacks should be credible. Meaning that if your opponent doesn’t defend, proceed to choke them.

This tactic requires good judgement, you don’t want to make yourself vulnerable by committing to attacks you don’t want. But often you’ll be working with someone that is “twitchy” and tends to react to every little thing you do. You can use this to your advantage.

Okay, I wrote a whole other article about the power of head pressure. So I hate to sound like a broken record. But seriously, God gave you a battering ram to protect your brain. Your head should always be pushing, grinding, or blocking something.

Remember that framing is fundamental concept used to escape a variety of positions. If you don’t want to get framed, your head should be vacuum sealed to their bodies anyways.

I’ll be honest, I rarely get wristlocks. But it doesn’t matter. I’m always looking for them. It makes people think twice about where their hands are, and it’s another risk free threat that you always have out there.

The key with wrist locks is to control the elbow, and be decisive when you throw them on. I sort of think they’re easy to apply in a tournament, when you can go 100% quickly and get the tap. Sometimes in training, it’s better to go slow and not hurt anyone.