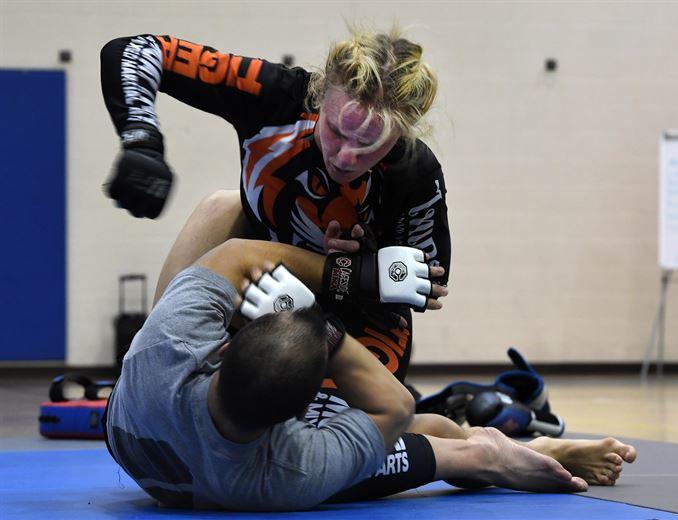 A large number of people begin BJJ in order to learn an effective self-defense system.  The “Gracie Challenge” videos, as well as the UFC confirm that BJJ works to consistently defeat a fully resisting opponent with less submission grappling experience.  Nevertheless, quite a few BJJ curriculums neglect the MMA grappling aspects of BJJ for basic self defense.

Many BJJ schools don’t train many of the crucial grappling techniques seen in both classic challenge videos and any number of real and hypothetical self defense situations.  Here are four reasons you need to train MMA grappling for self defense.

The worst position in a fight is, of course, being mounted or turtled while someone rearranges your face like an angry chimpanzee.  Any bread-and-butter MMA grappling curriculum drills escapes from both mount and turtle in a situation where striking is expected.  A proper escape sequence involves a guard recovery to stand-up or being able to scramble out of the turtle. While any BJJ will drill mount escapes, many will not address the additional challenge of dealing with punches.

The second situation training MMA grappling addresses is being pinned against the wall by a strong and determined attacker.  Every MMA fighter must train to fight off the cage as well as use the cage to defeat an opponent. This skill set transfers well to what you would need in a self defense situation where you are pinned against a wall or car door, for example.

The last grappling position especially relevant to self-defense is any variation of a headlock from the front or back.  MMA grappling prepares you to defend and counter guillotine attacks as well as front sprawl head and arm headlocks. In addition, you will be better prepared to defend standing rear-naked chokes.  There is a good chance even an untrained person will try some variation of grabbing your head or neck, and being able to address this threat is crucial.

The addition of knees in the clinch and strikes on the ground make for a rude awakening to those who have never gone live under MMA rules.  Many of the instincts or reactions in non-striking stand-up grappling such as wrestling or judo will get you blasted in the face, gut, or groin by a vicious knee.

Additionally, BJJ guard players who have never dealt with strikes are in for trouble when they try something too fancy on a guy with good pressure and a mean fist. Even a few drilling sessions per week under MMA rules will keep you from being a fish out of water under a more open ruleset.

#3. The Faster Pace of MMA Grappling is Better Suited for Self Defense

The fact that striking makes traditional BJJ stalling or resting positions untenable means that training MMA grappling is faster, more fluid, and more explosive than a typical rolling session in the gi.  In a self-defense encounter, explosivity, aggression, and simplicity of techniques are going to carry over better than fancy lapel guards. Furthermore, if you can build up to a typical MMA grappling practice, your cardio will be far better than just training in a gi.

If you watch any of the old Gracie challenge videos, pretty much every fight involves striking and wrestling before any BJJ specific techniques come into play.

In the first fight, Lowell Anderson sprawls hard on his challenger before sinking in a deep arm-in guillotine. At 8:34, we see BJJ grappler in the gi hit a clean double leg takedown off of the wall.

It’s not necessarily common for typical BJJ schools to teach comprehensive systems for grappling against the wall or under a more open ruleset. Nevertheless, it’s clear that MMA grappling skills were integral to old-school BJJ.

Are there downsides to MMA grappling?

There are some downsides to training MMA grappling for self-defense. Even though MMA rules are far more open than sport BJJ, there are still vicious techniques banned in sanctioned competition.

These include head stomps, eye gouges, and any number of biting or fish-hooking techniques that would be devastating if applied from a position of control by a determined attacker.  This is not to mention the typical contingencies such as weapons and additional attackers.

Nevertheless, the fundamental abilities to escape the mount, wall pin, and front headlock still need to be learned, and MMA rules are a good way to ease into training with open rules.

Why do schools neglect MMA Grappling?

I believe that often, these skills are neglected because they are difficult to train and time-consuming.  Many people roll for the fun of it and aren’t interested in months of grinding out MMA grappling.

It’s also possible that the instructors at a given BJJ school aren’t competent at this skillset.  This may be fine for your goals on the mat, however, if someone is serious about learning practical self-defense, they may need to look at additional training.

Okay… I want to train MMA grappling for self-defense… now what?

If you can train BJJ at a good MMA school, there should be the opportunity to learn the MMA fundamentals needed for self-defense.  If you are at a traditional BJJ school that doesn’t do MMA grappling, you could see if anyone might want to put on MMA gloves and do light taps during open mat to simulate more realistic grappling.

Furthermore, depending on your relationship with the instructor, you could ask about whether MMA grappling techniques are something he’s considered teaching, even in a private lesson. If none of these are options at your school, you must make an honest decision about your goals in martial arts and what you need out of training.  Many people, myself included, have moved from the school they started at because it did not offer training that was meeting their needs.